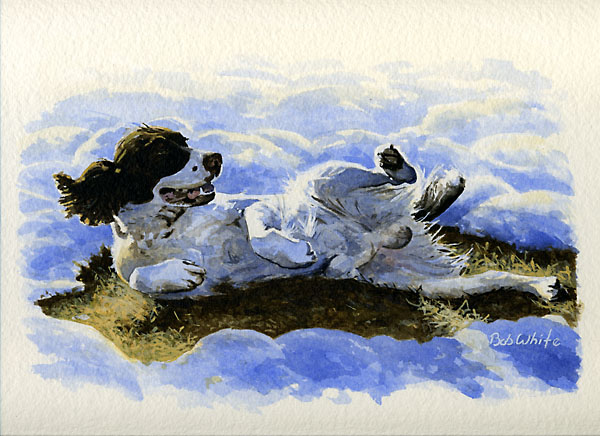 From the end spring new beginnings
~ Pliny the Elder

Sometime in March the snow begins to melt, and my least favorite season of the year is thrust upon me… it’s dog shit time. The shear volume of crap I’ve shoveled over the years has made me somewhat of an expert on dog logs in general, and specifically, in picking up a winter’s worth of the stuff in the spring.

The poop season came earlier than usual this year, and I was shocked by what the retreating snow revealed. Even though Lisa and I pick up what we can in between winter storms, there’s still plenty that we miss over our five to six month Minnesota winter. “I’ve had it,” I grumbled as I pushed the door shut with my shoulder and carried an armload of firewood to the old stove that warms our studio. “It’s nearly impossible to get to the woodpile without stepping on a bomb; today is the day of reckoning!”

“I know,” Lisa, replied, “I’m afraid to walk back to the house after dark. I’ve begun to think of the path as the trail of turds. You want some help?”

“What about your monthly essay,” she asked. “You haven’t even started it.”

“It’ll have to wait,” I answered as I took a cigar out of the humidor. “Besides, I don’t even know what I’m going to write about.”

“You’ll think of something,” she said reassuringly.

“Yeah… something will come to me. I always do my best thinking outside in the fresh air.”

“You better take a couple of those,” Lisa finished. “It’s going to be a long day.”

Every chore has it tools, and as I gathered them for the task that lay ahead, it occurred to me what I’d write about. I had something really important to share, my thoughts and ideas about a most unpleasant task.

As odious as the job before me was, it would be even worse if Lisa and I hadn’t discovered a little know secret for firming up our dog’s deuces. As late autumn turns to winter, we begin to mix one quarter-cup of canned pumpkin into Gus’ dry food. The resulting butt nuggets are so hard they fairly bounce off the frozen ground. Most importantly, they’ll remain firm even through the snowmelt, resulting in dog rockets that don’t fall apart and turn to poop-soup.

I like a trenching shovel and a hoe for the dirty work, with a twelve-pack beer bottle box as a working receptacle. The standard plastic bags from most grocery stores seem to fit into a beer box perfectly. Be sure to check your bags for nicks or tears; there’s nothing worse that the resulting mess if you don’t. The box provides a rigid frame with a wide opening and helps me avoid soiling my hands when I make a deposit. While a bucket would work even better, I enjoy the aesthetics of working with a beer box. I prepare for the annual event by increasing my intake of bottled beer over the weeks leading up to the season. I’d like to point out that I never drink while I hunt the little brown terrors that haunt my dreams. I’d no sooner drink and hunt dog dumplings than try to perform brain surgery while intoxicated. I prefer to celebrate my victory after I finish.

Speaking of aesthetics, the spring pick-up is the perfect time to enjoy a fine cigar. Given the celebratory nature of the occasion, I always treat myself to something that smells nicer than what’s on the end of my shovel. A Cuban or mild Dominican does nicely.

It’s important to dress properly. No matter how carefully you tread your hunting grounds it’s only a matter of time before you lose focus, slip up and step on a land mine. I’m constantly amazed at the hypersensitivity I’ve developed to what I’ve just stepped on. I might tread on an acorn or a stick, or perhaps a stone or a clump of mud nonchalantly, without concern. But there’s a greasy, smearing feeling when you step in a pile of puppy puddin’ that is like no other, except perhaps like stepping on a ripe banana. I am immediately snapped out of my trance. This is why it’s critical to wear smooth, crepe-soled boots… lug soles are a turd-picker’s nightmare.

Know your dog: We once had a flat-coated retriever named Luke that was house trained in one day and never had an accident that was his fault. Luke was a real gentleman and always wandered into the woods behind the studio to do his business. I lived in ignorant bliss for over a decade believing that every dog would be the same.

Our second retriever, however, has a finely honed talent for pinching off his load in places where they are most likely to be stepped on. While he’s never left a pile on the back porch or the stairway to the studio, you can count on a fresh steamer at the bottom of the stairs, on the path to the house, or in front of the woodpile or kindling box. One of Gus’ most endearing habits is to leave a shoe killer in the driveway exactly where you’ll squish it when you step out of the car. How he knows the precise spot is one of life’s mysteries. Gus is a nervous squatter and never stays in one place when he dumps his load, preferring instead to spread them along a line that may wander around the yard for ten to twenty feet. This makes pick-up interesting. Much like tracking big game, I cut the trail, determine the direction and follow it to my prize.

A day in the yard collecting K-9 stool samples really brings out the best in my Germanic ancestry, and I become very anal about technique. I begin by placing the plastic-lined box on the ground at the edge of our property and slowly walk away from it, focusing entirely on just the few square feet in front of me, preferably where I’ll place my next step. When I reach the end, I turn around and walk directly back on the very same line. Some dog dumplings are diabolical in their ability to blend into their surroundings, and I’m always amazed at the number of lawn slugs I pick up on the return trip. It’s important not to be lured off course by a particularly tempting pile; one will lead to another and suddenly you’ll forget where you were on the grid, which results in shoddy workmanship and missed opportunities. The confident turd-stalker trusts his abilities and is not drawn off course; he knows he’ll pick it up on the next pass.

The trick to using your primary weapons is to let the hoe do all the dirty work, pull and lift with the hoe. The shovel merely provides transportation of the load back to your box.

Let’s start with the easy ones, a big firm pile lying on top of the rotten snow. It’s simple; you slide the shovel underneath while you scoop it on with the hoe, trying to exclude as much snow as possible. Nothing could be simpler, though root beer snow cones will never be the same for me.

Some nuggets are more difficult and require a more advanced skill-set. Those blind eels that were stepped on earlier in the winter before they were firm enough to retain their structural integrity, and are flat to the ground, need to be scraped onto the shovel. In this instance, the angle of attack is key, and I’ve found that the blade of the shovel should be at a right angle to the leading edge of the hoe as the scrape-stroke is completed.

You’ll inevitably find some earth-toned twinkies that were pushed through your best friend’s hoop early in the season and are exposed on top but surrounded on all sides by compacted snow. These little gems are often tenacious in their refusal to be removed from their icy lairs, and whatever you do… no matter how tempting it is, don’t try to chip them out with your hoe. If you do, you’ll find yourself covered with shit-stained ice and snow. The experienced practitioner of the art relies on patience instead of brute strength, and waits for the afternoon sun to reveal enough of these cunning littler adversaries to get a good hoe-hold on them.

Before you know it, your box will be filled to capacity. When it is, carry the load to your trashcan in the box… this is very important; even though you’ve checked your bags for tears, you may have nicked it with the shovel. If there’s even the slightest tear all hell will break loose on your way to the trashcan.

“Lunch is ready,” Lisa called from the house, and the truth be told, I was ready for a break.

“What’s for lunch?” I asked, as I unlaced my boots a good distance from the back porch where Lisa had placed a small picnic set up in the warm, midday sun.

“Your favorite,” she replied. “A braunschweiger sandwich with raw onion and a touch of brown mustard. Thanks for taking your boots off.”

“Sure… thanks for lunch.”

“Aren’t you going to wash your hands?”

“There’s no need,” I answered. “At my level of skill, I know in the depth of my soul that no lawn sausage has touched these hands. Care to join me after lunch?”

I’ve learned over the years not to be proud when it comes to scooping poop; a second pair of eyes can be indispensable, and what better way to spend a pleasant spring afternoon than filling countless bags of the stuff with your wife.

As we walked to the back yard, I stopped in the shop to pick up a pad of paper and a pencil. “What’s that for?” Lisa asked.

“I’ve decided to write my next essay about the spring ritual of picking up rover loaf. There’s a lot of rich material to mine, and I don’t want to forget anything that occurs to me while we’re at it.”

With Lisa’s help we finished long before dark, with plenty of time to move along to our next season. It’s the sugar season, time to tap our trees and begin the syrup making process… something sweet for a change.

Good hunting, and be careful out there…