Now and Then – The Things I Carry 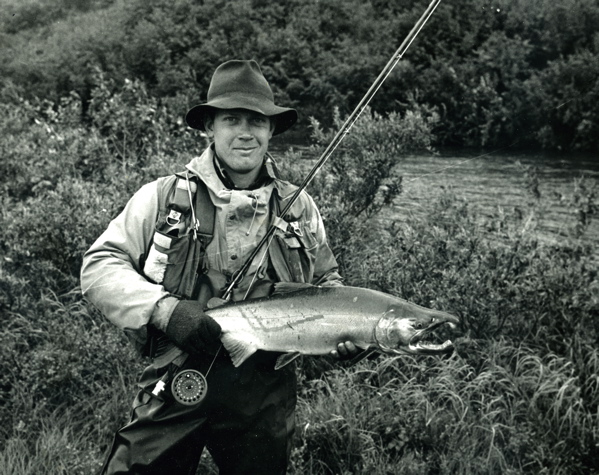 I first traveled to Alaska in 1984, and worked there as a fishing guide for eighteen summers. In the fall of 2000 Lisa and I resigned our positions at the lodge where we worked so that I might paint and write full-time, and of course, have our daughter Tommy. After an eleven-year hiatus, I returned to the waters where I learned my craft, to guide with young men less than half my age.

The things I carried with me for those three months in Alaska were very different than twenty-eight years before. During the time leading up to my departure, I collected and sent ahead some of what I’d need for the summer. Then I stuffed what was left of it into two large duffel bags and marveled that they weighed less than 50 pounds apiece.

In 1984, when I packed for my first summer in Alaska, my rubberized canvas waders weighed nearly twenty-five pounds. The “light-weight” latex pair that I carried as a spare (and the necessary boots) weighed at least ten more, more than a third of the weight of my bags today.

As I recall, the latex waders didn’t last a week; the stub of a beaver-chew opened them up so quickly and completely it looked as if I’d lost a knife fight. They were hopelessly beyond repair, but in those days nothing was wasted, and the scraps were saved for patching material. By the end of that first summer, I remember there was more rubber patch than canvas on what I tried to pass off as waders.

The season’s end meant a welcome reprieve from standing naval deep in icy, wet clothes, and we guides celebrated the event by burning all of our leaky waders in a towering funeral pyre. It would have made any Viking warrior-king proud. If not for the perpetual rain and fog, the inky black cloud it produced could have easily been seen in Dillingham, nearly 60 miles away. I’m told the haze lingers over the coast of southwest Alaska to this day.

Everything in my new kit has evolved into low-weight, highly efficient gear. My two pairs of breathable waders and boots weigh less than fifteen pounds. Heavy wool sweaters and pants, once the only option to stave off hypothermia, have been replaced by new, lightweight alternatives. The SmartWool products I now carry, weigh a fraction of what I used wear. Even my fishing equipment is lighter and stronger, but I don’t take much with me these days. Over the years I’ve learned just how little fishing a guide actually gets to do. Besides, I don’t like to mix my pleasure with business.

In 1984, the total sum of the electronics I brought with me consisted of a D-cell flashlight. Now I travel with a laptop computer (the lodge has an internet connection), two digital cameras, and two separate hard-drives for redundancy of data storage. I once carried a couple of harmonicas to entertain my friends, and myself. Now I have an i-pod shuffle that’s smaller than a matchbox and holds over 300 songs. There are thousands more stored on the laptop, should I get bored with the selection. I still bring a flashlight, of course, although the LED light draws less than a tenth of the power from the tiny and long lasting lithium batteries that power it.

There are some things that I carry with me now that I would never have guessed at when I packed for that first summer. Now, I wear prescription glasses, a new development that I struggle with. I also have three false teeth and carry ten… okay, fifteen extra pounds.

When I first journeyed to Alaska, I carried with me the arrogance and the hubris of youth. I believed that I was the master of every situation I encountered; that if I threw my shoulder into it, there was no rock too big to be moved. Since then, I have developed a more acute respect for life, and have a keen appreciation for just how quickly one can be lost. This season I’ll bring with me a confidence grounded in experience. I’ll pick my battles carefully, and walk away from those I judge not worth the risk.

I’ll also carry with me the memories of friends, both fishermen and guides that have crossed their last river. My old friend and mentor, Jack, will be with me every day when I open the folding knife he left me. I watched him use it at our shore lunches for 18 summers.

Most importantly, I left behind a loving wife and family, and I carried the pain of our parting. They missed me and counted upon my safe return, and I carried a determination to do my very best to make the separation worthwhile. 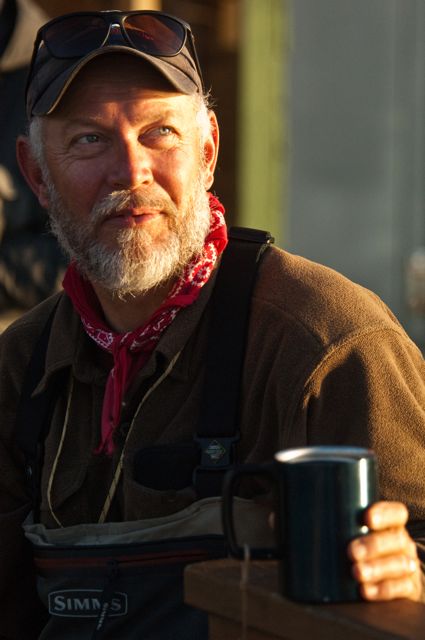