A Time to Trade Stories 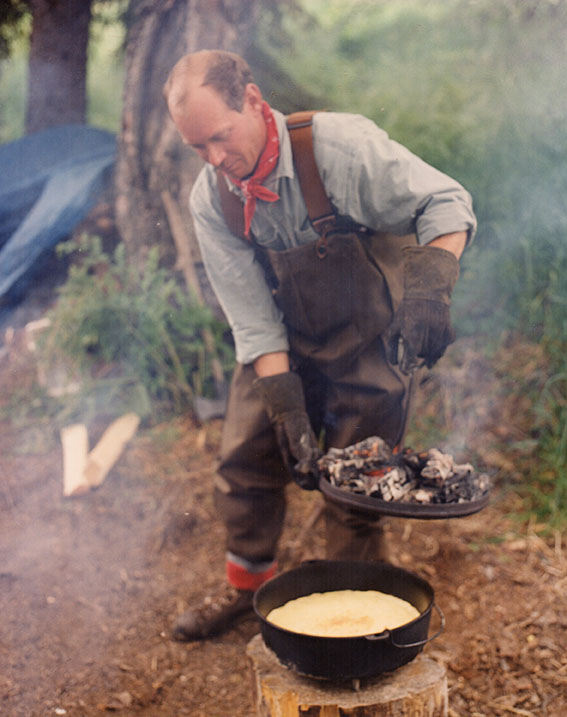 “It is more fun to talk with someone who doesn’t use long, difficult words but rather short, easy words like, ‘What about lunch’?”
~ Winnie the Pooh

From the water the place looks no different than any other part of the shoreline, but once you climb the bank, it becomes obvious that it’s special. This lunch spot has been cared for and improved upon for nearly fifty summers. Every spring a crew of fishing guides hauls beach-pebbles from the lakeshore to gravel its walkway and dining area. The benches and serving table were sawn from enormous logs. A hammock hangs between two birch trees, inviting a short after-lunch nap. The neatly stacked pile of firewood is covered and dry. The fire pit is made from river rock and fits an oversized grill. An assortment of frying pans and an enameled coffee pot hangs from an overhead limb. A venerable and fire blackened Dutch oven, named “Lucille” occupies a place of honor on it’s own round of spruce. All around, ferns dance in the dappled sun light and birch leaves hang like bottle-green stained glass.

The collective spirits of generations of fishermen and their guides lingers in this place, and their tales of fish landed and lost blends with the murmur of the river. This hallowed ground is where we will share our lunch.

I unpack the box and organize its contents. I take my welder’s gloves, spatula and spices from my backpack and make them ready. Pulling on the thick leather gloves, I put the Dutch oven into the fire to preheat while mixing a can of beer into a container of Krusteaz pancake mix to make a batter. When “Lucille” has been warmed to the point that bacon grease starts to sputter and smoke, cornbread batter is poured in and the lid put on. It’s then placed on its round and several handfuls of glowing coals are spread across its top.

That initial task done, I turn to the potatoes and a small onion. The spuds are sliced paper thin and laid upon a plank of cedar. The onion is diced while a cast iron skillet of bacon fat starts to heat. A second skillet joins the first, also with a bit of fat and the diced onion

While they sauté, three apples that were cored the night before, and stuffed with raisins, walnuts, honey and cinnamon, before being wrapped in tinfoil with a splash of white wine, are placed just inside the coals where they’ll warm and soften without burning.

There is just enough time to open a couple of cans of French cut green beans, drain them off and add them to the onions, before putting the potatoes into the fat to fry. The green beans will be prepared the same way my mother made skillet greens when I was a kid, with an egg scrambled in them and apple cider vinegar drizzled on top.

The “gravel bar chips” are brown and crisp on both sides, when they’re taken out of the fat, and placed on the cedar plank to be salted. I look up through the wood smoke and see hungry stares. “You better start on these before they get cold.” I say, and grab a couple for myself. I turn back to the fire. The mountain of chips disappears.

The char fillets are dragged though the beer batter to the sound of a second cork being pulled. The fillets take the place of the potatoes and start to sizzle and crisp around their edges, while I cover the beans and turn the apples.

The cornbread is checked; it’s just starting to brown on top. The coals are dusted off “Lucile’s” top, and the fillets turned. While the char crisps on the other side, I set the table, and take a quick swallow of the wine that’s been offered.

The corn bread comes first, with butter and honey lathered on top. The green beans are uncovered and seasoned to taste. There are still a few potato chips left, and the char is perfect, crispy around the edge and flaky-moist in the middle. A special mixture of Tabasco, lemon juice and balsamic vinegar is poured on top. The apples are turned one last time and the stories subside into a silence that every cook appreciates.

As our appetites are slaked, and the stories begin again in earnest, fueled by the food, the wine and the friendship. Finally, it’s time for a cup of campfire coffee and dessert. I forget the gloves and juggle the apples from hand to hand after pulling them from the ash. We all wet our fingertips to pull open the foil and get at them. The wine has turned to a fruity steam and the honey into a thick caramel-like, cinnamon-flavored sauce.

“It’ll take me a few minutes to clean this up.” I say, getting to my feet. “The hammock’s pretty nice, and there are usually a few trout just off of the bend.”

As I clean up around the place, and organize my lunch box and backpack, I hear soft snores from the hammock, and the sound of a good fish taking it’s first run.

The river whispers and the spirits smile. 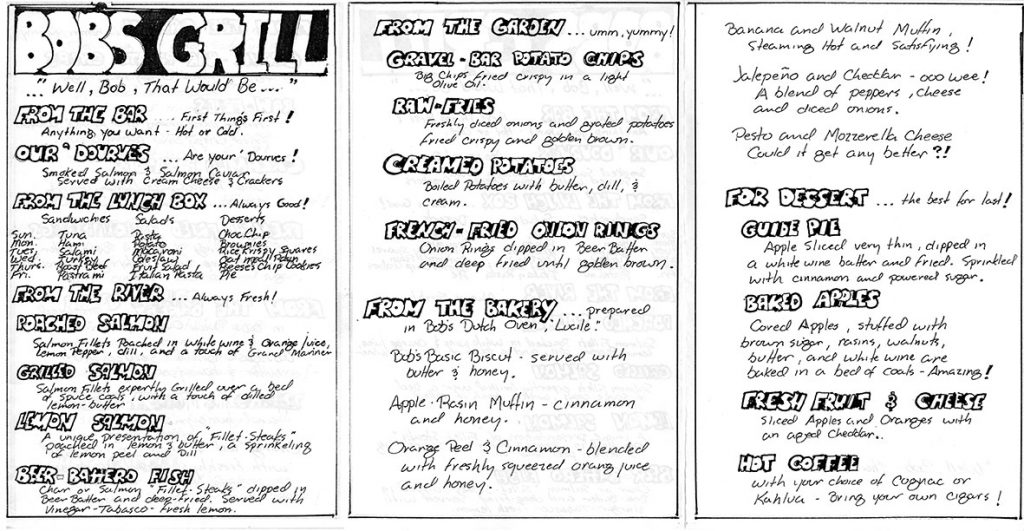