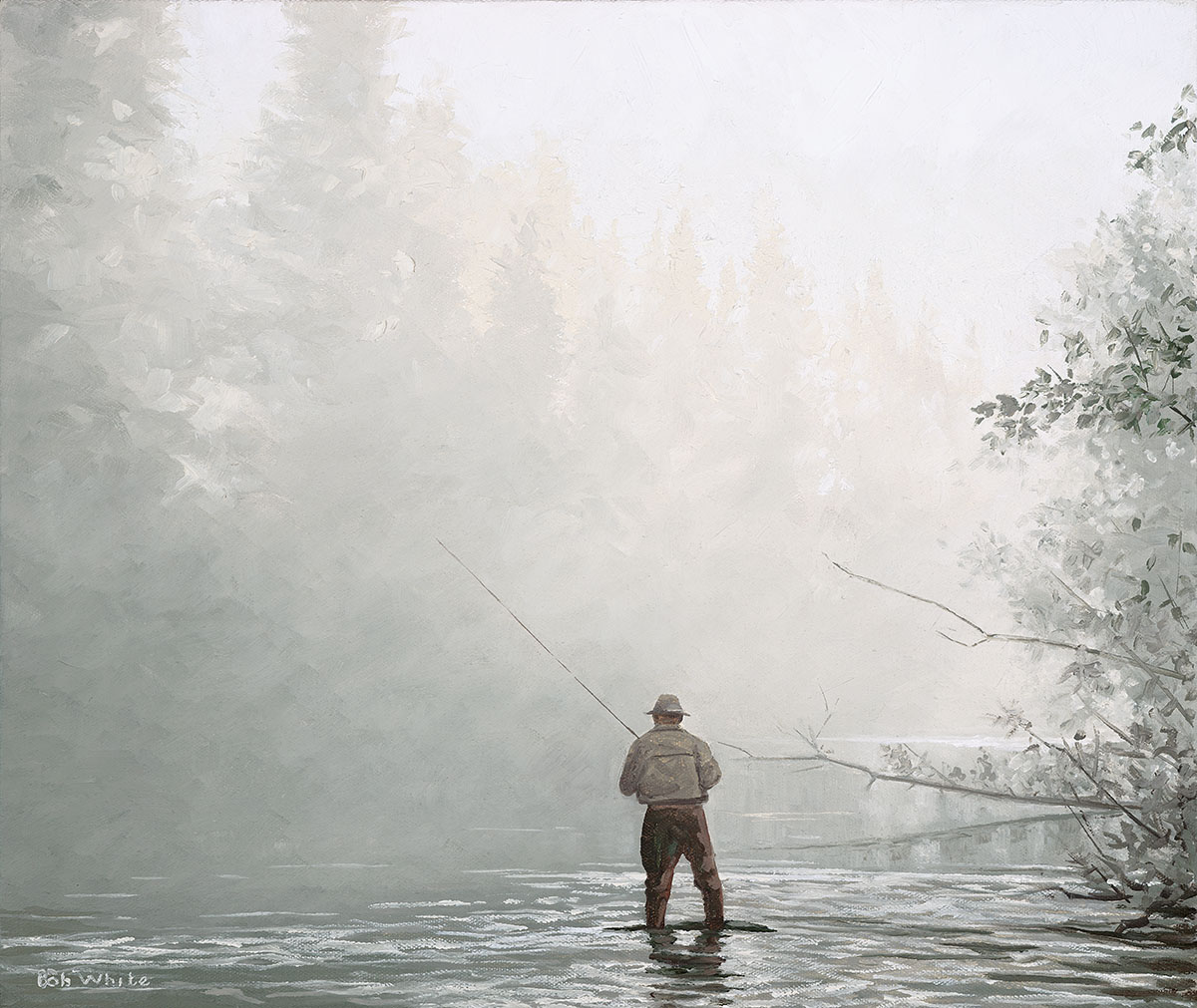 Truth is beautiful, without doubt; but so are lies.
~ Ralph Waldo Emerson

The alarm clock, an old-fashioned affair with twin brass bells, exploded into a cacophony that sounded like a chainsaw ripping through roofing tin. A wading boot was expertly thrown, knocking it off the bunkhouse table and it danced around the floor like a thing possessed. When the spring finally wore down and the noise ceased the old guide sat upright in his bed. His sleeping bag still draped around his shoulders, he yawned and scratched his flaming red beard. “Rise and shine, boys. Time to get to work!”

A low growl came from Rusty and the whining stopped. “What’s the weather like?” He asked.

I was a “new guy”, which meant that my bunk was in the corner between the plank door and a double set of windows, all of which leaked cold air for need of chinking. I pulled back the wool blanket that helped to darken the room, wiped away the wet layer of condensation, and pressed my nose to the glass. “Zero-zero.” I answered.

“What d’ya mean, ‘zero-zero’?” Rusty asked suspiciously. The last time he’d asked me, I’d forgotten to wipe the window first, and had been called, “Zero-zero” for a week.

“I mean that I can’t see the lodge and it’s only fifteen feet away.”

“Awesome.” Someone said from a dark corner of the bunkhouse. “We can finally sleep in.”

“Bullshit!” Rusty replied standing up and letting the sleeping bag fall to his feet. His wild hair, flaming red beard and sagging red union suit made him look like some sort of demonic Santa’s helper. “Anyone can guide when it’s nice and sunny and the fishing’s easy. These are the days when you earn your pay.”

Several more moans came from the darkness, followed by a wadded up T-shirt, which Rusty deftly plucked from the air while scowling. “What d’ya think The Boss is going to tell twenty people who’ve traveled all the way to Alaska to go fishing? ‘I’m sorry, but it’s too foggy to fly, and the poor guides are too sleepy to take you out on the lake.’ I don’t think so. Now, goddamnit, get to work!” He said, tearing the blanket off the window and hurling the knot of T-shirt back into the darkness, scoring a direct hit.

The fishermen came down to breakfast to find a cheery blaze in the fireplace and The Boss surrounded by his guides. All of them ready to go fishing. “It doesn’t look like we’ll be flying today.” Said one of the guests gloomily, as he looked out the window.

“Oh, this is just morning fog, nothing more,” answered The Boss in an upbeat manner. “It’ll be gone before you know it, and it gives us a great opportunity to fish some of the local water. The fishing around the lodge can be wonderful, and we never use it. Let’s all have breakfast, suit up, and go fishing around here until the fog lifts, and then we’ll all fly out to where we planned to fish.

“Sounds great, boss!” Rusty chimed in. “All the boats will be ready to go in a few minutes… right guys?”

Fifteen seasons and hundreds of foggy days later, I found myself in charge of organizing alternative fishing plans. As I walked down the hallway to the crew room, I could hear the guides grumbling…

“Jeez, if I have to fish the narrows one more time, I’m gonna puke!” One said.

“Did you hear The Boss in there at breakfast?” Another asked.

“You mean the part about how good the fishing is gonna be, ‘right around the lodge?”

“I can hear it now, ‘ahhh, Flounder… why don’t you take four fishermen up Bear Creek! It’s a rare opportunity to see some of the unique local water’.” Said one of the new guides from Minnesota. It was more than a fair imitation of me, and I smiled.

“Can you believe the Boss?” Said a guide from Montana. “Man, the power of positive bullshit!”

I winced at that because I was just about to make someone’s worst nightmare come true. We were short of boats, and the only way to make the fishing assignments work, was by dropping one of the guides off at Bear Creek with four fishermen. This wasn’t the kind of job that I could give to just anybody. Whoever did it would have to be the kind of guide who could make a silk purse out of a sow’s ear, and do it with a smile.

I handed out all of the easy assignments first and then turned to a very nervous first-year guide. I didn’t have the heart to send him alone, and besides, someone had to show him the power of positive bullshit.

“Flounder?” I asked. “Why don’t you and I take four fishermen up Bear Creek? We’ll turn it into a clinic on how to sneak up and sight fish for Grayling.”

Over the years, I’d been taught a lot about guiding by Rusty and The Boss, and one of the most important lessons I learned was the power of positive bullshit. A fishing guide has little or no control over most of the aspects that make up his day. It’s important to be prepared, improvise when you need to, and stay positive.

There’s a fine line between the truth and bullshit. Most of the time the only difference is how you look at the world. Being positive doesn’t mean that you wear rose-colored glasses, ignoring life’s problems. It means that you make the most of whatever comes your way. It’s always nicer to spend the day fishing with someone whose bottle is half full.

As a fishing guide with almost 40 seasons between Alaska, Argentina, and Chile, I’ve become something of an expert regarding bullshit. There are two distinctly different types of bullshit…bad bullshit and good bullshit.

There are several types of good bullshit… there’s benevolent bullshit, stiff-upper-lip bullshit… and most importantly… good, old-fashioned positive bullshit. Positive bullshit means not taking no for an answer, and making the best of every situation. This is the bullshit a friend dispenses when the truth would do nothing but add a negative twist to an already difficult predicament.

Negative bullshit usually tries to change or hide something. It misrepresents the truth, and makes it appear to be something it’s not. It’s usually about being lazy and taking the easy way out.

Always trust your guide. If he’s good, he’s more concerned about you having a positive day than you are. His choice of bullshit should do nicely.