A Recipe for Small Fish 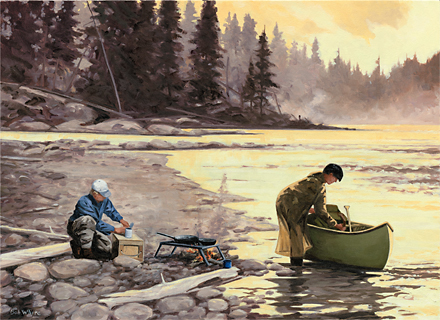 “You ain’t one of those damned catch-and-release freaks, err ya?”
~Rusty

It was my first summer in Alaska, and I was learning the ropes from an old guide, named Rusty. The Boss had decided that a boat needed to be moved, and Rusty concluded that the ensuing road-trip was a perfect opportunity to teach me a few things.

The morning was clear and cold when The Boss landed the floatplane in the salt-chuck of Bristol Bay and beached it on a lonely spit of sand. In his usual manner, he suggested that the quicker we pulled the boat out of the alders, where it’d been stashed the past autumn, the easier our day would be. The tide was falling fast, he said, and in an hour there would be a hundred yards of mud to drag the boat across before we reached water. Rusty and I had the boat in the river and the outboard running before the de Havilland disappeared to the north. The distant drone of the plane was quickly replaced by the hum of the outboard as it warmed-up. Once it was running smoothly, Rusty rummaged around in a rubberized boat bag (the first I’d ever seen), and pulled out a thick Helly Hansen rain slicker, ski goggles, rubberizes elbow-length gloves, a wool watch cap, and earmuffs; like the ground-crew at the airport in Dillingham wore. I chuckled to myself once he’d donned his “running-gear”, as he called it. With his flaming red beard sticking out at odd angles from beneath the dark goggles and hat, and his elbow length gloves, he looked like a nuclear power plant worker that had wandered too close to the reactor.

My gear was lightweight and crisply new, first generation Gortex, fingerless gloves, a ball cap, and polarized fishing glasses. Within half an hour, I was cold, my eyes were wind-burned, my hands numb, my ears ached, and everything in my rucksack was sopping wet because no boat is completely dry. Lesson learned; efficiency and comfort trump fashion.

Sometime around noon, Rusty turned toward shore and cut the engine. “Time for some lunch,” he announced as the boat glided in silence, and beached itself perfectly on the gravel bar. The quiet was startling. “I’ll make a fire, and you go catch us a mess of grayling.”

I’d never seen an arctic grayling, much less caught one, and I certainly didn’t want to kill any, because I fervently believed in releasing all fish. “I brought us a couple cans of pork ‘n beans,” I offered as a compromise.

“Well, that’s real nice,” he said, as a look of concern crossed his face. “But, this here’s a shore lunch… and we need us a mess of fresh fish for a shore lunch.”

“Do we really have time to cook fish?”

“We do if you’ll stop yapping about it, and go catch ‘em.”

His concern deepened. “Hey, you ain’t one of those damned catch-and-release freaks, err ya?”

I hung my head. What had been a badge of honor back home made me a tree-hugger in Alaska.

“Waugh… every critter out here eats something else,” he began. “Jest be glad that we’re at the top of the heap.”

Just then a brown bear emerged from the forest on the opposite shore. “Or, near the top of the heap,” he corrected himself.

“It’s gettin’ so folks don’t know where their food comes from any more, Rusty continued. “If you’re eatin’ it… then someone had to kill it. It’s a good thing to be at the top of the food chain,” he concluded. “Now… go catch us some fish! I haven’t had fresh grayling since last fall and my mouth’s watering for ‘em.”

That was a long time ago, and while I still believe that catch-and-release can be a valuable management tool, I don’t believe its wrong keep a few small fish to enjoy for dinner.

As with any wild food, it’s extremely important how you handle it on the way to your kitchen. Rusty taught me not to gut a fish on the stream if I planned to take it back to the lodge.

“Let me put it like this,” he said, “if you aren’t comfortable drinking a cupful of water from the stream you’re fishin’ in, why would you wash your lunch in it?”

There are a lot of ways to prepare small fish. My old friend, Tom Waters, liked little brook trout seasoned with salt and pepper, rolled in flour, and fried very crispy in butter. He once reminisced that as a kid, while camping and exploring trout streams, he’d throw a couple of leftover brookies into a shirt pocket in the morning and snack on them for lunch. He ate them whole; heads, tails, and skin. If the twinkle in his eyes was any indication of how good they were… count me in!

Another good friend, Scott Johnson, has been the executive chef at several world-class fishing lodges and resorts. Scott is considered to be one of the top-ten chefs in the country, and specializes in meals prepared with only the freshest, regionally obtained ingredients. This is one of his favorite recipes for small trout.

Times change, and even old dogs learn new tricks. Rusty now believes that a good fish is too valuable to catch only once, and admires them for a few seconds before they’re gently released. He also still enjoys a good shore lunch.