Other Treasures Among a Box of Rocks 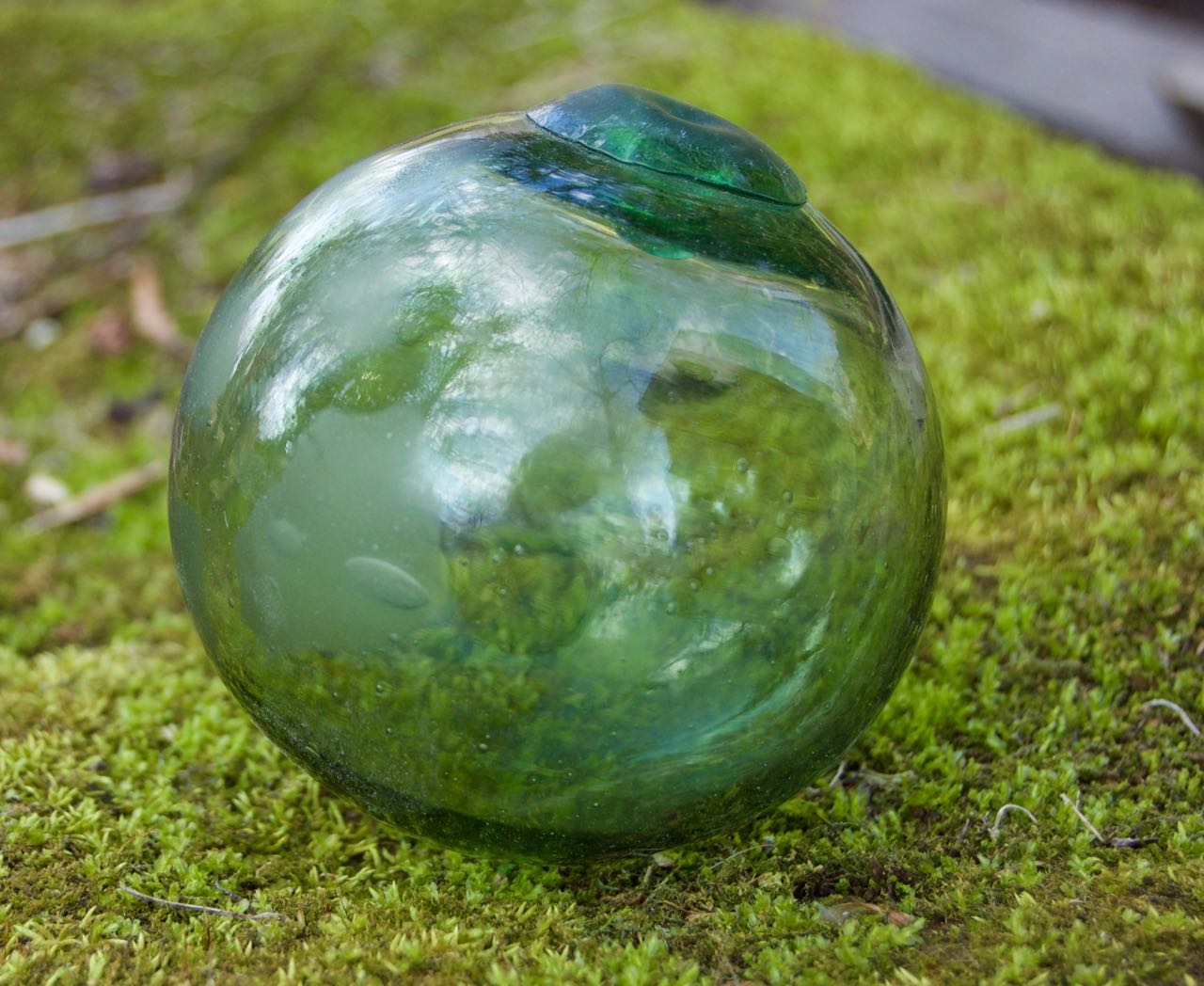 Someone I’ve never met, but who receives our weekly newsletter, happened to stop by the studio for a visit. We’d just exchanged pleasantries when I was called down to the house.

“Sorry to leave like that.” I said upon my return.

“Not a problem,” he replied. “It was fun to look around the place. Even though we’ve just met, I feel like I know quite a bit about you.

There’s the box of rocks that you wrote about,” he said, nodding toward the corner. “But, there are more than just rocks.”

He was right; there are more than just rocks. All manner of wonderful things can be found in the boxes behind the old wood stove.

After my friend left, I began to sift through them looking at the treasures, and my mind wandered back to the places I’d found them.

A warm haze softened the horizon as the plane droned over a seemingly endless expanse of small lakes and potholes.  Any indication of our ground speed fell away as we flew over the coast and across Bristol Bay. The ocean was still and the horizon indecipherable. It was muggy even at four thousand feet, and I found it difficult to believe that it was the opening day of duck season.

I’d been up late the night before untangling decoys and I easily drifted off to sleep. I awoke when The Boss neared the beach where we’d land and the propeller’s pitch changed. The tide was out, the beach broad, and the mudflats full of ducks and geese. While the weather was less than perfect, the timing couldn’t have been better. As the tide came in, the birds would leave the flats in waves, looking for fresh water in the marsh that lay just a few hundred yards inland.

The landing was long and smooth; the beach was hard packed and more uniform than most runways in the Alaskan bush. The Boss rolled to a stop at just the right spot, insuring us the shortest possible walk to the point he knew I favored, and it didn’t take long to unload.

“I’m going to King Salmon, to visit with the fellas at Fish & Game,” The Boss said.  “I’ll be back in four or five hours.”

“Clear,” he called. It was more of a statement than a question.

As the plane rolled away I shouldered the bag of decoys and stepped into the marsh grass. The prop wash blew over us until The Boss was well down the beach. When it stopped… they attacked.

Clouds of mosquitoes erupted from the grass with every step we took. They were everywhere at once, in our eyes, our mouths, our ears, and our noses. It was impossible to breathe without inhaling them. None of us wanted to admit it, but we were all just a hair’s breath away from panic.

“Is it always like this?” One of the hunters sputtered, while spitting out bugs.

“God no!” I mumbled, trying to answer through closed lips. “Thank God they’re not biting.”

I received a bit of respite while setting out the decoys. When I returned I fully expected my friends to be wearing the head nets that, the night before, I’d insisted they bring. They both sat on the shore with their jackets over their heads.

That’s odd. I thought to myself as I tore into my shooting bag for one of the two nets that I always carry. “Aren’t you guys going to get your head nets on?”

“We forgot them,” they answered in unison. “Do you have any spares?”

“Just these two.” I replied with dread in my voice. “Here… you take them. I can’t use a duck call while I wear one, anyway.”

With no wind, we were enveloped in a solid cloud of bugs. The only relief came when I went out on the water to retrieve a downed bird, and I thanked God that I’d left my retriever back at the lodge.

“You ‘ok’?” One of the hunters asked with genuine concern. He was concerned… but not troubled enough to give up the head net.

“I’ve got to get away from here!” I said, terror rising in my voice.

As long as I kept moving there was a small margin of relief, and I walked toward the highest point of ground I could see, hoping to catch a slight breeze. The high ground ran parallel to the beach; a storm berm that had been deposited with all manner of flotsam from centuries of high tides.

It was there, walking with my head down, just ahead of the cloud of mosquitoes that I came across the most beautiful glass float ball that I’d ever seen. The hemp netting had long since rotted away, but not before masking the surface from the sand and wave action in an eerie negative etching.

After finding the glass ball, I began to search among the flotsam for others, not realizing that the glass ball had found me. The realization made itself clear when I finally spied a second, only to find that it had been broken into perfect halves. I left them there, where I’d found them, perfect in their imperfection, content with the subtle lesson I’d learned.

That perfect and unique glass ball now rests a top the box of rocks, among several other cedar net floats and pieces of whalebone that I found that day. 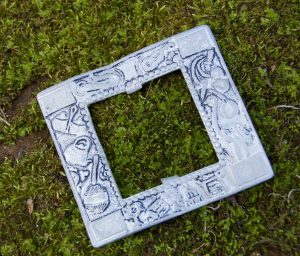 Beneath the float ball is a silver belt buckle found in Argentina, while guiding on the Malleo River. The buckle is highly etched with the images of a gaucho’s life. There’s a sheathed knife, boloderos, a maté gourd, a guitar, and an elaborate scene of an estancia. How it came to be lost I can only imagine. Was it a result of passion or tragedy? Sometimes it’s a fine line between the two. Why it revealed itself to me, I can only speculate, but it’s something to think about on winter nights.

Some years ago, my friend Bill, and I were standing on a gravel bar next to a river in the Russian Far East. We were waiting for the fog to lift sufficiently for the helicopter that was hovering overhead, in and out of sight, to land and start us on our journey home.

Bill had a few cigars left and we contentedly puffed away while reliving highlights of the week’s fishing. It’s interesting how quickly a morning cigar becomes a normal and anticipated part of one’s day. 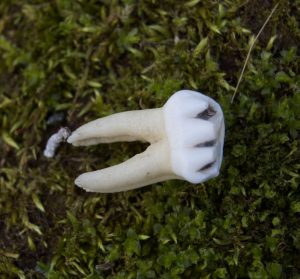 A contrast of color caught my eye and caused me to look down. There, perched a-top of a blood-red rock was a gleaming white human tooth. Not just the crown but the whole thing; roots and all. Where it came from and why it presented itself to me is still a mystery. I felt an overwhelming need to pick it up, wrap it into a fold of my bandanna, and take it safely away from where I’d found it. I discovered later that the lodge where we had stayed was once a KGB facility.

When you guide summers in Alaska, and the winters in Argentina, you never really unpack. Life becomes a comfortable state of flux, and it’s not uncommon to find things rolled up into a pair of dirty socks and tucked into a wool cap at the bottom of some dry bag. That’s exactly where I found the set of keys for all of the locks, to all of the gates on the Estancia Tres Picos.

It was the final week of my last season in Argentina and I had decided to take a day off and go fishing. It was cold and rainy, and snowing in the mountains. When I arrived at San Huberto, Carmen greeted me as I walked into the kitchen to be near the woodstove. “Roberto,” she said. “I thought you had gone home. How is my favorite little Gringo?”

“I leave in just a few days,” I answered. “I have today free… if no one is fishing the spring creek, I thought that I might go there.” 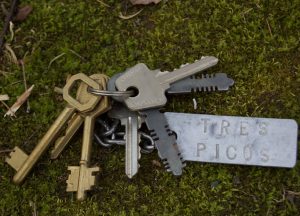 “Por su puesto,” Carmen answered. “Here are the keys to the gates… but you must promise to return them. This is the last set. The new guides have lost all of the others!”

She held them out of my reach. “Promise me this,” she said, finally handing them to me with one hand while she pinched my cheek with the other.

It was a day of fishing that I’ll never forget. It was also so cold and wet that I decided to drive directly to San Martin in my waders. In a trance, and anxious to make it over the Paso Santa Julia before it snowed in, I forgot to return the keys and found them years later. They now rest in the box, among many of the rocks I collected from the Malleo, all reminders of a place far away and long ago.

Perhaps the most interesting item in the box was not found on a river, gravel bar, or beach, but along side Interstate 90, just east of Buffalo, Wyoming.

“Let’s pull over,” Lisa said. “Tommy needs to be changed, and I could use a break.”

“Do you want to wait until Buffalo?” I asked, hoping to get a little further down the road.

A sign on the right read, “Schoolcraft Road”, and I thought about fishing in Michigan as I slowed to turn off of the interstate. We’d been on the road for sixteen hours, but the view was breathtaking, and seemed to revive us. Lisa busied herself with Tommy as I stretched my legs and wandered off the road to relieve myself of too much truckstop coffee. I’m not sure why we do… but most men like to have something to aim at when they pee. As I un-zipped my pants, I noticed what looked like a mushroom among the roadside rocks, and stopped to pick it up. As the dust fell away and I got a good look at it, I almost dropped the object in my surprise, What had looked like a mushroom, was in fact an intricately worked bust of a black woman, carved in granite. The entire bust was just a bit bigger than the shift knob on an old tractor, and was completely polished, except for the tooling of her close cropped hair. 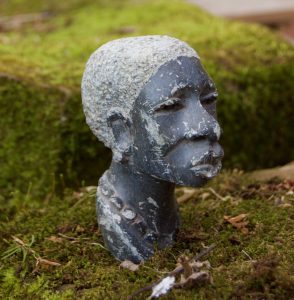 “Holy shit!” I said under my breath.

I found the glass net float on the last day I guided duck hunters on the Alaska Peninsula. I like to think of it as a going away gift from those wild and windswept marshes.

Not only had I forgotten to return the keys to Carmen, I also left my boots sitting on the gatepost where I parked the car. They were gone the next day, perhaps taken by a gaucho riding the fences. I’d traded my traveling shoes for the keys to the gates I’d no longer need to open.

Lisa wanted me to leave the little granite bust where we’d discovered it. But, I believe that it found me for a reason. I’ll be sure to let you know if we ever find out what the reason was…