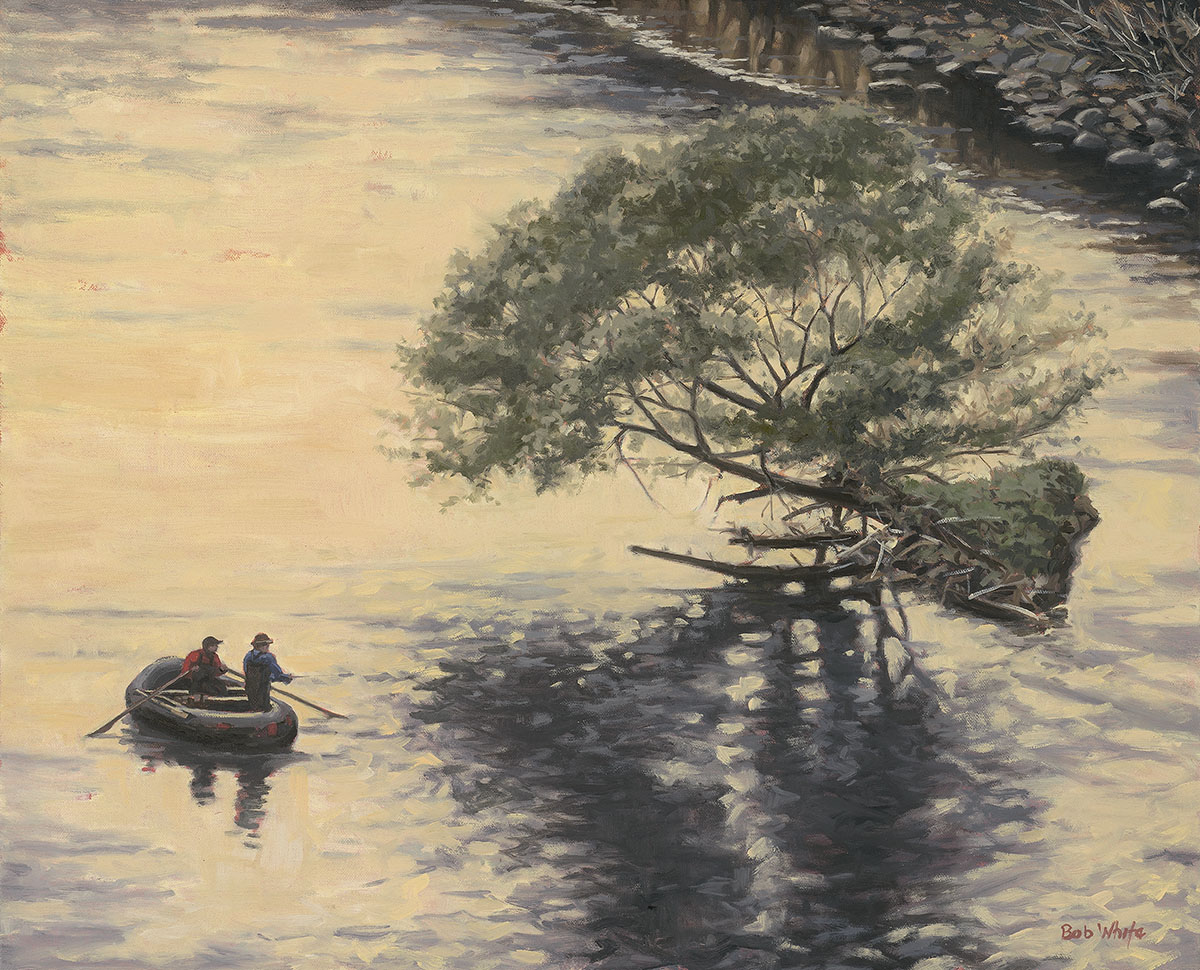 Fishing guides are an interesting study in the human condition. Most people become guides because they love to fish, only to find that they rarely have time to fish because of their profession. Those who stick with it guide for any length of time learn to enjoy the sport vicariously; their client’s successes become personal triumphs… and subsequently, client failures are often painful.

During my first year in Argentina, I’d located a large and difficult brown trout that lived in an enormous back-eddy, under the sweeping and protective limbs of an ancient willow tree. This particular fish was well known, and the guides at San Huberto would take only their very best fishermen to the pool. I believe the guides wanted the fish to be caught by someone they deemed deserving. No doubt, there was also a bit of mental self-preservation in the decision not to take just anyone. It’s extremely difficult to maintain a smile and watch a fish like that feed with impunity just a few feet beyond a fisherman’s best cast.

There was always an electric sense of anticipation around the lodge whenever one of us fished for the big brown, and we all waited for our friend’s return in the evening; the look on his face always told the story.

One week I was to guide a very talented fisherman who had paid to fish individually. Not only did I have someone who had the skill and experience to get the job done, but I also had the luxury of devoting all of my time and attention solely to him. I was convinced that we’d finally catch the big brown.

We approached the fish on our hands and knees, supplicated like pilgrims entering a medieval cathedral. For this was indeed “hallowed ground”. We lay prostrate in the grass and watched the big fellow as he patrolled his home water, making a circuit of the pool he controlled, feeding at several choice spots before returning to his favorite resting place under the willow.

In the belief that the time spent watching such a fish was worth more than the time actually fishing, we watched him all morning. Then, we snuck away to fish somewhere else for the afternoon and evening, and returned the next morning to watch again.

We timed how long the fish spent feeding at a particular place, and how long it took him to take up his next station. The idea was to have the fly waiting for him, drifting drag free as he arrived. In this manner there was a minimal chance that we might spook him with a bad presentation or dragging fly. After days of scouting, we were ready.

After all of the time we’d spent watching and scheming, the anticipation was unbearable. I can tell you quite honestly that we were both on a razor’s edge when the first fly was cast gently and perfectly onto the water. As I write this, I can close my eyes and still clearly see the big brown leisurely and confidently rise to the fly.

“What?” The fisherman said, finally responding to my screaming in his ear by jerking the rod up too late.

“God-damn-it!” I cursed, ripping the hat from my head and throwing it to the ground. “Shit!” I hollered, “God. Damn. It!” I turned my back and stormed off.

I walked twenty paces down the beach before I remembered my friend and realized how he must feel. I turned around to see him standing motionless; head hung low, staring at his feet.

“I was watching a real fly,” he whispered hoarsely as I walked up. “Just as he fed, I watched it fly away. I’m… I’m so sorry.”

I put my hand on his shoulder. “I was so caught up in the moment that I forgot I wasn’t the one fishing. I felt like I was holding the rod in my hand. I was mad at myself, not at you.”

“Jeez,what a fish,” he said with the beginning of a smile returning to his face.

The first thing a good guide does upon meeting a client for the first time is to determine the fisherman’s goals. Does this person want to be taken to good water and just left alone? Does he want to catch a lot of fish by any and all means? Does he expect to have his flies tied on and his fish released for him, or does he want to learn to do these things himself?

Some fishermen want the guide to spend all his time helping and teaching their spouses; ensuring that they’ll have the best possible time. Others want to be put on the best water while you teach casting technique to their beloved. A good guide will do just about anything to assure that his client feels successful, even if that means loosing a few fish because of a not-so-perfect knot that the fisherman wanted to tie himself.

I knew a guide in Argentina who, after realizing that one of his fishermen would need the bulk of his attention, spent his lunch hour crawling along the bank marking big trout with small scraps of his red bandanna. After wolfing down a quick sandwich, he directed the more talented angler to work up river focusing his time on any water with a bit of red thread tied in the brambles over it. The guide then went down river to attend to the other fisherman. At the end of the day, everyone was happy.

Another friend of mine used to spend his after-lunch siesta-time on the water that he planned to fish in the evening. He’d aggressively fish either a wooly bugger or hopper with the hook cut off at the bend. Down the middle of the river he’d walk, casting first to one side, then to the other. If a fish followed the big wet fly out from underneath the willows, he’d quickly pull it away, mentally marking the spot. If a fish rose to his hopper, he’d give it slack line and let the fish spit it out… again marking the spot. Amazingly, his clients always fished well in the evening, after their rest.

Often, a guide will have two fishermen of greatly differing ability. It’s as painful for the guide to watch one fisherman catch all the fish, as it is frustrating for the beginner. I watched a guide in Alaska deal with such a situation. After it became apparent that it was going to be a lopsided day, he moved the novice into the bow of the boat so that he might coach him more effectively. The more experienced of the two anglers sensing the advantage, used the situation as an opportunity to fish both sides of the boat, often taking good fish in the drift that his partner was about to make.

Whenever this occurred, the other guides on the river winced in pain. He suggested that they trade places, but the beginner kept missing strikes; he needed that extra bit of instruction to hook that first magic fish. The guide knew that it would only take one fish to turn the corner, and that the more experienced of the two friends wasn’t about to take a minute or two out of his day to help it happen. With just a few moments left before the floatplane arrived to ferry them back to the lodge, the new fisherman finally hooked a fish, and a very good one by the sound of his reel.

“Let’s just reel up and enjoy this fish.” The guide suggested to the champion.

“Just one more drift.” The hero said, casting his line.

“What should I do now?” Screamed the beginner. “He’s running out all my line!”

“Let him run.” The guide suggested. “You have a lot more backing than you think. It’ll be all right.”

“I’ve got another one!” Bellowed the ace, as his line moved off down river and tangled with the novices’.

“Now what do I do?” Wailed the beginner.

He dropped the anchor to hold the boat, waded down stream to the tangled lines, reached up, and grabbed the mess. Then he looked back to the boat to see what color of fly line belonged to which angler, and choosing one, he bit it in two.

“Take your time,” he said calmly to the neophyte as he waded back to the boat. “Maybe you’ll land both of them.”

There are few bonds stronger than those between fishermen and guides, particularly when that friendship is based upon mutual respect… and sometimes a bit of mischief. There’s little a guide won’t do for a fisherman he likes, and even less that an angler won’t do for a guide that he looks up to and admires. Sometimes, an interesting twist can occur when serious measures are called for.

When I guided in Alaska, the lure of choice for early season char was the Cast Master; a sort of skinny, chrome-plated spoon that must look amazingly like the salmon smolt upon which the char gorge themselves. One of the guides at the lodge had developed a friendship with a pair of older fishermen from Wisconsin. While one of the older fellows following his guide’s suggestion, put on a Cast Master, and was always catching fish. The other insisted on using his selection of old Dare Devels and groused all day at the lack of activity.

“By Gott, Norman… vie can’t yoos catch no chars?” One of the old timers asked the other. “Vat in da hell kind o loor are yoos using, anyvay?”

“Can I talk you into using a Cast Master?” Pleaded the guide.

“Yoos guys use vat yoos vant… and I’ll use vat I vant! Dars no chars under my side of da boat is all.”

The next morning the two friends tied on their lures as the guide motored out to a hot spot, the mouth of a river through which all the smolt must pass on their perilous journey to sea. The water frothed as char chased smolt to the surface. Arctic Tern, and Bonaparte Gulls dove wildly into the maelstrom, screaming as they wheeled in tight circles and plunged again.

“By Gott… today’s my day!” Norm said taking a deep breath and then a mighty swing of his rod.

The line broke and his red and white Dare Devel sailed away, a distant “splush” marking its return to earth.

Lester tied on one of his guide’s Cast Masters and had two fish to the boat before Norm had tied on his second Dare Devel.

“By Gott…I’ll get dem now!” Norm swore as his second cast arched away from the boat.

The line snapped again. “By Gott un Himmel!” He fumed, just ahead of the distant “splush”.

Over the next twenty minutes Norm lost every one of his thirteen Dare Devels. The last was a cherished Rocket Devel, designed for the heavy water of Canada’s Tree River.

“By Gott… vat now?” Norm asked to no one in particular as he scratched his whiskered chin.

“Can I talk you into one of these?” The guide asked, holding out a box of his lures.

That night, after dinner, Norm excused himself to rest for the next day’s fishing and Lester asked the guide if he might buy him a drink.

“I hear that you two finally talked old Norm into giving up his Dare Devels today,” said the bartender.

“Vell, Norman alvays brings tirteen Dare Devels vit him, yoost for luck. So late last night we pulled fifty yards of line off of his reel, und put a drop of super glue on the spool. When it dried, den we reeled in a few yards und put anoother drop… und anoother, until we fixed it tirteen times. Den ve joost let old Norman do da rest!”