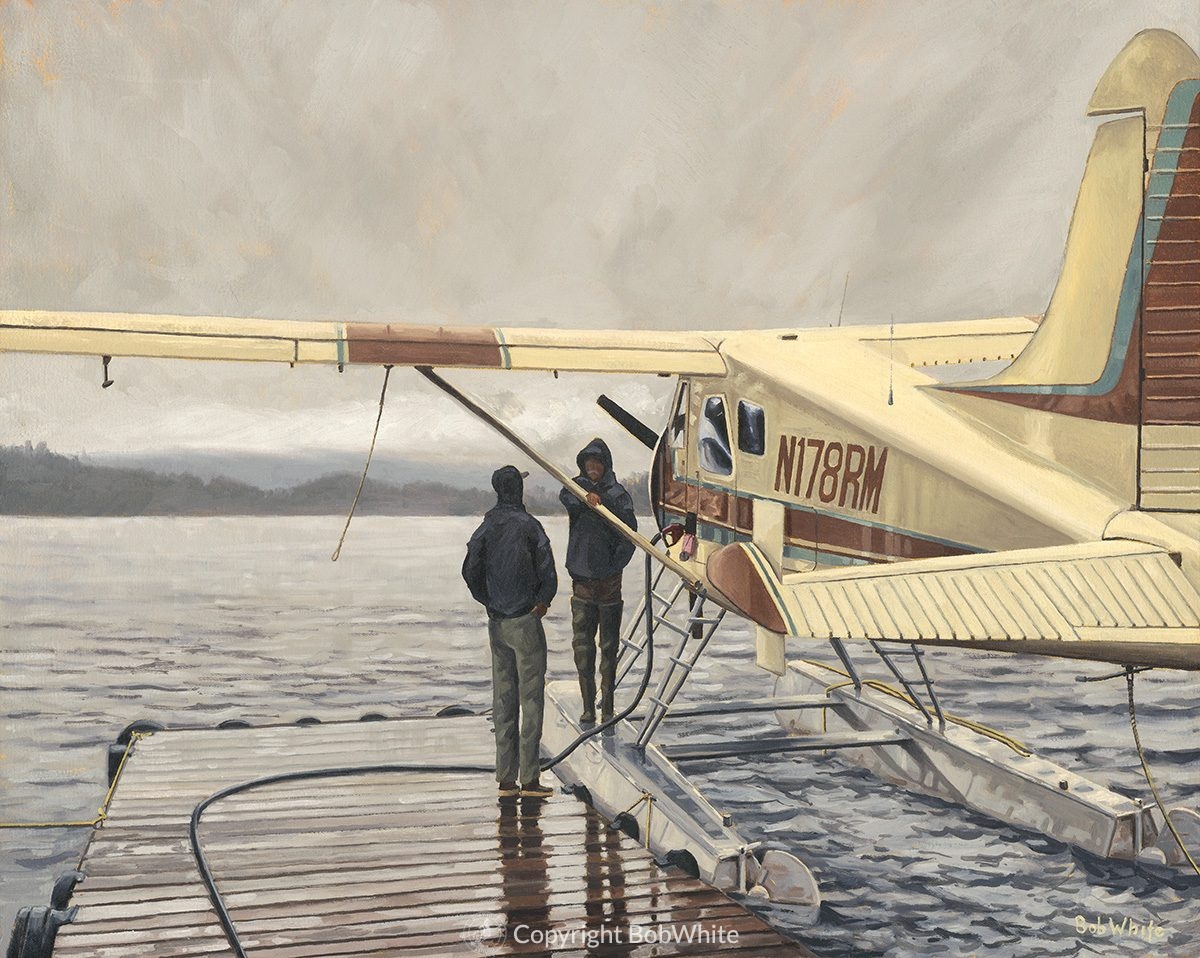 The weather started to fall apart during lunch, though it hadn’t come as a surprise. The marine forecast on KDLG out of Dillingham had been calling for a big blow. An enormous low-pressure system had been tracking across the Bering Sea for the last two days, and would make landfall sometime in the night. The front would pass to the south, battering the Alaskan Peninsula with strong winds and wrapping back around to hit us out of the southeast.

The winds were building and the ceiling was dropping fast when we heard the de Havilland Beaver. The Boss had left the coast early to pick up the four fishermen that my friend, Doug, and I had guided on the Agulukpak River. We had been forewarned to head straight to the top of the river, where we’d be protected in the lee shore, the instant that we heard the plane.  The Beaver was tailed on the beach before we arrived, and we could tell by The Boss’s body language that he was anxious. The conditions were still safe, albeit a bit windy, but he was worried about the other two planes, particularly the one returning from the Togiak Valley through Sunshine Pass.  “We’ll see you back at the lodge.” The Boss said through the opened door, as he primed the engine. “Stick to the south shore… you’ll be fine. Clear!” he called. It was more of a demand than a question.

“Clear!” We responded in unison.

As the Boss taxied away from the protection of the shore, plumes of spray were thrown from the prop whenever it caught a wave top. The big radial engine quieted to an idle, and the plane weather-vaned into the wind. The water rudders came up and the Beaver sprang to life. It was on step in an instant, and off of the water in what seemed like an incredibly short distance. We watched as the plane roared over, trailing its float ropes. It disappeared behind the trees and then turned down-wind toward the lodge.

“Good to go,” I replied. “I’ll follow you.” The soft, gray mist had turned to a driving rain.

The trip back to the lodge on Michalk Lake takes an hour on a good day; today would be longer. We’d be safe along the south shore of the lake, leaving it’s protection only when we had to cross the mouths of two fiord-like arms; the Silver and Golden Horns. When we did, we found the waves out in the lake swollen and angry, and we slowed to ride down their front sides rather than plow through the crests. I didn’t want to take my eyes off of the water to check my watch, but I judged it to be at least two hours before we finally saw Rex’s cabin at the bottom of the Peace River.

The Peace is, for the most part, a flat meandering river that bears witness to its name. As it makes it’s final turn toward Lake Beverly, however, the last several hundred yards are fast, and broken. At its mouth, the river’s full force crashed headlong into the waves, which had doubled and redoubled in strength as they ran before the wind the entire length of the lake. The opposing forces created a maelstrom of chaotic and tortured rips; this would be the tricky part.

There was absolutely no pattern to the waves at the river’s mouth, and no obvious way to run it. Doug slowed, and I took it as a signal for me to come along side and travel abreast. The height of the waves would hide him from my view, and it would be disastrous to meet in one of the troughs. The following ride was exhilarating, not unlike skiing moguls, and I screamed aloud with excitement. Eventually, we found our way out of the tangled labyrinth of waves, and Doug looked over his shoulder at me with pursed lips and an arched eyebrow. We’re almost home to a hot shower and a cold beer… he seemed to say. I smiled back with the knowledge that because of our “commute” we’d missed cleaning the day’s catch of silver salmon.

We came through the narrows, just down stream from the lodge, to see all three Beavers tied to the dock, and Rusty pacing around in front of the big jet boat as its engine warmed.

“Well… how very nice of you two to finally show up,” he said, with a mixture of anger and relief, not unlike a parent whose teenage sons have finally arrived home from prom. “Did you guys stop off at Rex’s for a beer?” He continued, as he turned off the big boat’s engine. “I was just about to go out into this mess, and see if I could find your bodies.”

“Since you two lame-brains are already soaked, why don’t you run fish guts across the narrows for the sea gulls and bears. You’ll be back in ten minutes, and there’s a rack of cold beer in the fish house.”

No one at a fishing lodge wants bad weather, but when it happens –  the worse, the better.  If there’s no question of the day being cancelled, everyone seems to accept the situation and relax.  What’s really difficult is marginal weather that promises to improve at any minute. This creates a lot of anticipation and “hurry up and wait”. Anything less than a real blow would mean suiting up and taking the guests out to fish locally while waiting for the word that it’s safe to fly. If it was going to storm, we guides all hoped for the mother of all blows.

The rain, wind and fog continued to build all through dinner and into the night. The Boss’ announcement that the next day’s fishing assignments would be put on hold, at least until after lunch the following day was punctuated by a gust of wind that rocked the building. “Let’s take that as a sign to push breakfast back an hour,” he deftly added, and everyone cheered.

Once the decision had been made, everyone seemed to relax. A few more logs were tossed into the fireplace, and the seats at the poker table filled with hopeful players. The fly tying benches came alive, and everyone else pushed into the bar for shooters and a turn at the dartboard. We were all content to be warm, dry, and in each other’s company.

I’d spent too many late nights trying to win back some of my money from Rusty, and decided to turn in early. As I entered the low-slung log cabin and pushed through all the wet gear hung in the entryway to dry, I saw a crowd gathered around the old guide’s bunk. The static crackle of a marine shortwave permeated the room, and I’d never seen so many fishing guides so quiet or focused.

A resolute voice with a strong signal boomed. “Ah, Sharon D… this is Cold Bay Coast Guard. We have a Sea King in route to your location. I say again, we are on the way. What is your current situation?”

A panicked voice responded with a very weak, barely audible signal. “Mayday, mayday, we have lost our engine and are adrift. We are sending on batteries. Our current location is, lat 58.13, longitude minus 158.32. We are adrift. I repeat. We are adrift! Winds are out of the south at 45 knots, gusting to 60. Seas are running to 30 feet with rouge waves!”

“We’re on you Sharon D. The Sea King is 25 minutes from your current location. Hang in there guys.”

“Mayday! Coast Guard, mayday! Our hatch has broken in! We are taking on water! I repeat we’re taking on water! We’re not running our lights to conserve batteries and we’re in the dark. We are a crew of three. I repeat, three living souls. The crew has donned survival suits. They’re headed to the deckhouse roof. I’m staying here to continue sending.”

“Negative, captain! I repeat, negative! Stay together! I say again, stay together! We have your location and rate of drift. Captain, you get yourself suited-up with your crew and rope in! We need you all on one rope. The Sea King is 20 minutes out. Do you have strobes on the survival suits?”

“Roger that, Cold Bay. We’ll all be in one package, and the stobes will be on. End of transmission. Tell ‘em to hurry Cold Bay, and thanks. Out.”

The radio went silent, and so were we… for a very long time.

“Ratshit-fuck-kittyhole.” Rusty said a hoarse whisper. “Jeezus, can you imagine what it’s like to be out there, in the dark, in that weather? I need a whiskey! Pat, go to the bar and get a handle of ‘Jack’, tell Fleming to put it on my tab.” Rusty sighed. “What I have left won’t be enough for tonight.”

“And, I thought that I had a bad day,” another guide murmured.

“Do you think they’ll make it, Rusty?” Asked the new guy from Idaho.

Judged by lack of snoring that night, I don’t think any of us slept well. Word about the sinking got around as news always does at a fishing lodge, and The Boss met us before breakfast to tell us that all three fishermen from the Sharon D had been lifted off of the deck house roof by the Coast Guard helicopter.