A Fall From Grace

By Lisa WhiteNovember 16, 2016Adventures
No Comments 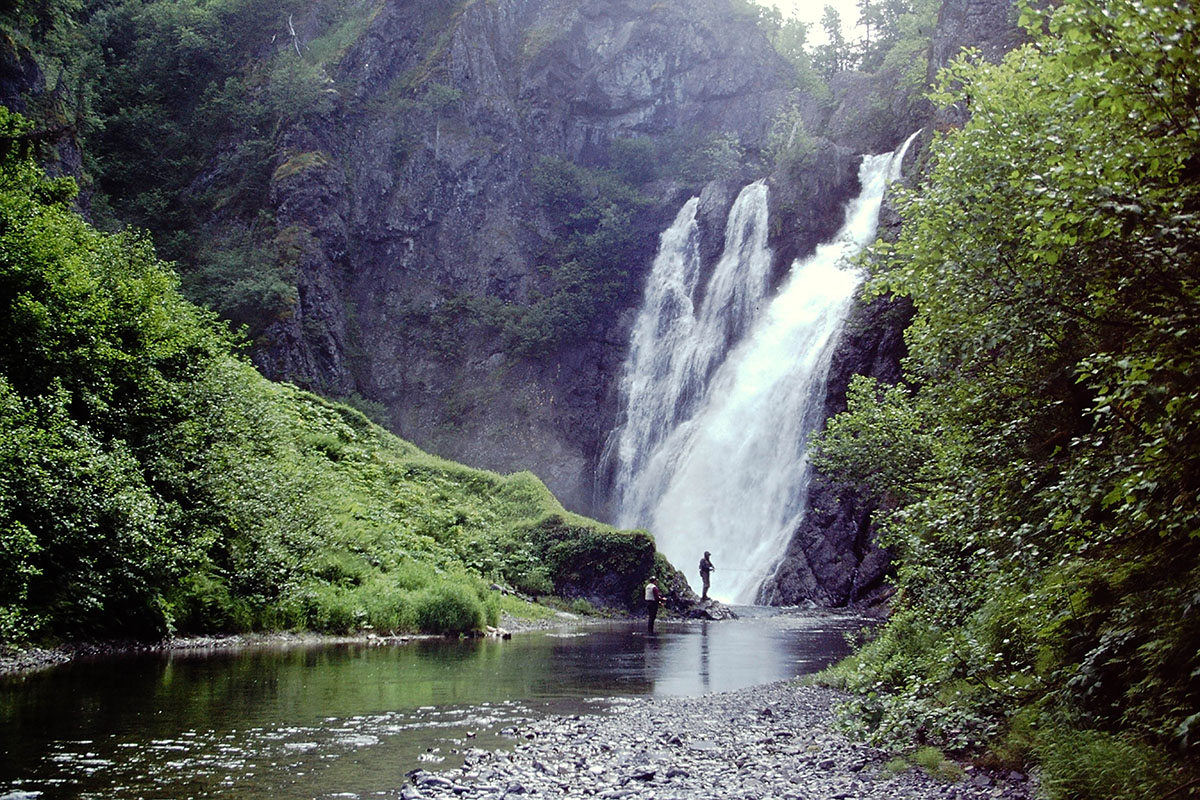 “When you make a mistake, admit it. If you don’t, you only make matters worse.”
~ Ward Cleaver

My friend Bob and I had a deal, and the agreement was this; every summer, for one day, we’d fish somewhere new. My job was to scout for possibilities, and it was understood that no adventure was too arduous or physically demanding… and no guarantees were needed. The idea was to go somewhere that had never been fished, or if it had been, only by those few as willing to work for it as us.

These adventures usually involved being flown to a lake or pond and then hiking across country to a river too remote or small to navigate by boat. The end of the day often required a long walk back, or perhaps striking out for a second body of water large enough for a floatplane to extract us.

Some of our adventures were far flung. Others were amazingly close to the lodge. Many were successful, others, not so much. All were exciting, and I looked forward to every trip.

One particular undertaking began on a lake just a short flight from the lodge. The plan was to fish down from the outlet of the lake and hike around a barrier falls. Once we descended into the deep canyon below, we’d fish the pool, which was the terminus of the salmon run for the entire watershed. Afterward, we’d hike and fish downstream to a portage that was usually used to access the river at it’s mid-point. We’d walk out, however, and be picked up where everyone else started.

The lake where we landed supposedly held a residual population of wizened char, left over perhaps, from a time when there was a vital connection to the sea. We cast at the outlet and moved no fish. We fished downstream toward the falls, but there was no evidence of life. Eventually, a low and distant hum became a deep, deafening roar and we stood above the falls.

We’d seen the cataract from the air, of course, but its scale from five hundred feet did no justice to the raw power experienced when standing in its presence.

There was only one way to the valley below; down a steep cut choked with alders. We disassembled and cased the rods, and began our descent, one tangle and barked shin at a time.

As we descended the roar grew, the mist thickened, and the temperature dropped. When we finally emerged from the tangle of alders, which looked benign from the air, we found ourselves in a magical and otherworldly place. The pounding water was deafening, the mist was pervasive, and the wind generated from the cascade blew a steady twenty knots.

We stood in awe for a moment, trying to comprehend our surroundings, but just for a moment. Finally, I said what we were both thinking.

“This water has probably never been fished,” I screamed above the din.

As was our practice, we rigged two rods. Bob set one up with a dry fly. His favorite was a big H&L Variant. If nothing slammed it in the first few casts, a prince nymph would be added as a dropper.

Well aware of the drill, I rigged the backup rod with a black wooly bugger.

I finished my task a bit ahead of Bob and stood there, rod in hand, looking at the virgin water. I guess it was more than I could take, for without thinking, and in slow motion, I began to strip line off the reel. Perhaps, I believed I was just clearing it for my friend. In reality, I was about to fall from grace.

I looked at the tongue of current where it left the plunge pool, and knew exactly where a fish would lie. In a complete and utter trance, I false cast twice and laid the fly on the water. 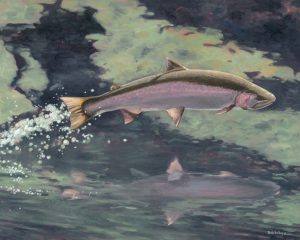 The strike was as instantaneous as it was utterly predictable, and I watched transfixed as the silver flash of a rainbow trout arched across the pool with my fly in it’s mouth. It was as if I momentarily stood in a painting by Lynn Bouge-Hunt. It was like living within the cover of a 1950’s Sports Afield magazine. It was a dream… it was a nightmare. I had committed the mother of all mortal sins!

I had just preempted my friend by casting ahead of him into a pool he’d no doubt dreamt about for the better part of a year. I watched in horror as the big trout jumped again, and was about to reflexively break it off, when the fish spit the fly. I was relieved to watch the fly tumble through the air and land in the tail out of the pool.

With down cast eyes, I sheepishly reeled in the line. As I finished Bob asked, “What do you think about a black wooly bugger?”

Sometimes it’s better to let things be, and not say too much.