A Morning on the ‘Pak 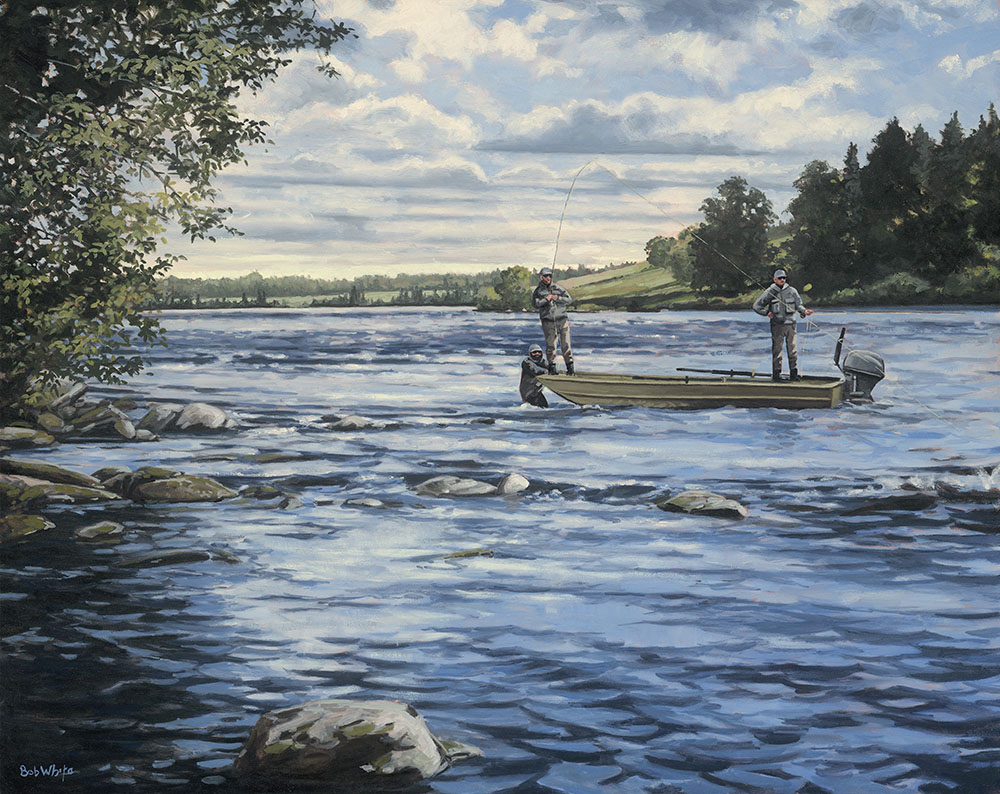 Many men go fishing all of their lives without knowing that it is not fish they are after.
~ Henry David Thoreau

The last thing I did, before climbing into the floatplane and squeezing between you and your buddy, was to put my old wooden lunch box into the float compartment. It was thoughtfully constructed on a rare day off, and carefully loaded the night before with everything we’ll need. After a short flight, our pilot has dropped us off at the bottom of the “Pak”, where it flows into Lake Nerka. Even though it’s the middle of July, the tin cup of coffee still feels good wrapped in your hands while I rig up the rods with sink tips and small streamers. First things first… we need to catch our lunch!

Though the spring migration of salmon smolt has peaked, there are still enough arctic char collected at the river mouth to assure a few fish for lunch. It’s a good thing too… we didn’t bring any salmon from the lodge as a back up. None of us will starve if no fish are caught. Still, it feels deeply satisfying to know that we’ll eat only what we catch.

I’m almost finished with the rods before your eyes wander to the water and you notice the slow and steady progression of sockeye salmon porposing as they travel just out of casting range, in a wide and deep column parallel to the shore. Their bright sides and electric-blue backs are just too much to resist, and even though I’ve explained that sockeye are plankton eaters while at sea, and have no predatory instincts, the need to throw flies in among them is overpowering.

I chuckle to myself as I row you out to them, remembering how thrilled I felt when I saw my first sockeye run. I still get excited about it, but for very different reasons. Even though there are hundreds of salmon within sight of the boat, it’s a long shot that one will take a fly. Still, I’ve learned to let ‘sockeye madness’ run it’s course and I hold the boat in the off-shore breeze while the two of you limber up your office-stiffened casting arms.

While you’ve been fishing, I’ve drawn the boat ever so slightly towards the mouth of a little creek that enters the lake. Actually, it’s a minuscule braid of the river that leaves the main flow, a few hundred yards upstream, and runs to the lake near where we’ve begun our day.

“You might try a cast or two there,” I say nodding toward the little freshet. “There could be fish.”

It’s a sure bet that you’ll hook a char or rainbow on your first casts. Everyone else rushes to the main river for the big action, and passes by this little two-fish opportunity.

“Nice fish, you guys!” I say with satisfaction, as I release your rainbow and then your partner’s char. “These guys deserve to be put back, besides, it’s good luck to let the first fish of the day go free. Now, let’s get out on the big water, put a real bend into those rods, and catch some lunch.”

You’re only too happy to comply as I pull us out into the river’s flow. Now the real work with the oars begins. The current is deceptively strong and it takes all of my strength to hold us in place while you make those first casts. I haul with long and deep strokes slipping the boat across the current and the river mouth while your flies swing out in long shallow arcs.

As your lines straighten, your partner’s rod is jerked to the water and he grunts, struggling to keep the rod tip high. Your attention to his dilemma disappears the instant your rod bounces too, and you’re both into fish. I drift with the current as the fish are played out and landed. Both are nice char. A smallish male is quickly dispatched, and the hen is released.

The boat is oared out of the current and back toward the river’s mouth. The process is repeated and in a short time we have what we need for lunch. After catching and releasing several more fish, all char, I suggest a change of lines and scenery. Floating lines are rigged with dry flies and small nymph droppers before we fire up the motor and head upriver toward the next lake, just a mile or so upstream.

Since this is your first time on the “Pak”, I suggest that you both face forward; the view as we turn the first corner is the reason.

I’ve been on rivers all over the world, but the scene before us still remains one of my favorites, and I want to share it with you. The river with its banks of towering spruce frames the distant snow-covered mountains. The water ahead is a maze of ragged boulders, broken whitewater, and standing waves. You look from the water to the shore and back again. The juxtaposition is startling… the landscape is calm, peaceful, and inviting, and the river, a dangerous and raging thing. You want to take in the panorama, but dare not take your eyes off of the current.

It seems unlikely that any boat can make it through such a maelstrom, and you look back nervously over your shoulders at me. The route through the boulder field is an unlikely one. We thread our way past rocks the size of small cars and then turn suddenly toward an island. Just when it seems as though the boat will beach, it pops up and through a narrow slot between the head of the island and a jagged ledge of stone.

We’re in the clear now, and as we round the big bend, the river becomes a sweeping expanse of classic dry fly water. We casually make our way through it and then past the last few ledges before the broad shallow flat that runs gradually out into Lake Beverly.

The view is spectacular, and I stop the motor while you both dig in your tackle bags for cameras.

The rest of the morning is spent fishing the top half-mile of river, from the lake to the bend. We fish it slowly and thoroughly while I walk the boat through the tumbling sunlit water and you both take some nice rainbows and an occasional grayling on dry flies and small nymphs. As we reach the bend, you release the last fish of the morning… it’s time for lunch.

The box is hauled up the bank and the fire started. The char are filleted and washed in the river while an aromatic blue haze drifts through the trees. As I finish with the fish, I hear laughter, and the unmistakable sounds of a wine bottle being uncorked.