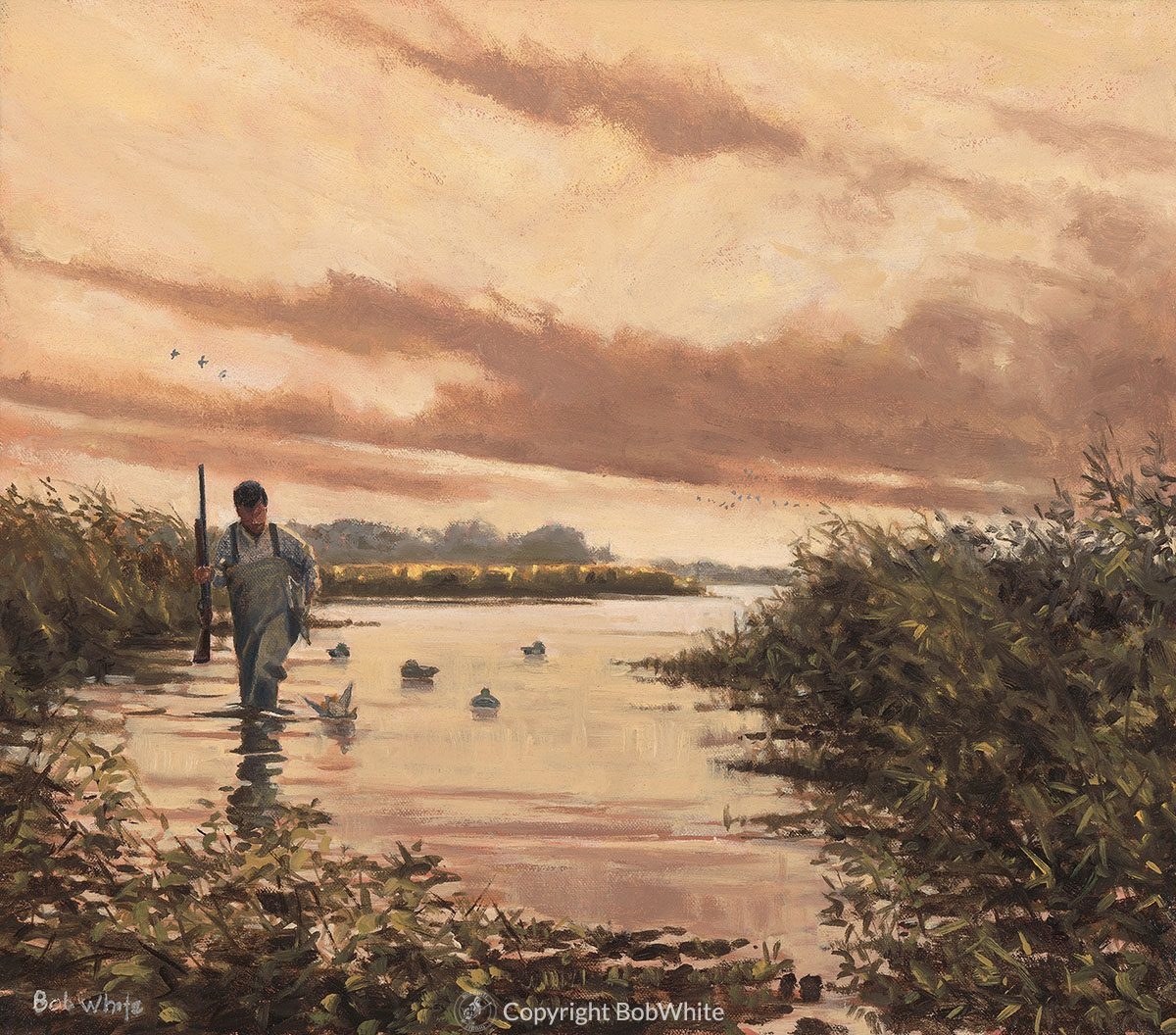 “Youth is a wonderful thing. What a crime to waste it on children.”
George Bernard Shaw

I chuckled to myself as I pushed the canoe around one last bend of the narrow creek. “I’ve got ’em all to myself.”

It had taken an hour of paddling through the labyrinth of channels and polling through the heavy grass, but all of the extra work would be worth it. The last two evenings, just at dusk, I’d watched from a mile away, as mallards poured into this remote corner of the marsh. They’d been feeding in the picked cornfields to the east and had come back to roost, tired, heavy, and content. They’d found a safe corner for the night and came straight in, falling from the sky like maple leaves. What was left of the setting sun emblazoned them as they fell, red and golden against the hazy blues and purples of the shadowed bluff.

I’d been reluctant to go the extra mile for several reasons; there were plenty of ducks around, and I usually returned home with my fair share. I also liked the idea of the ducks having a safe haven in the marsh because it kept the birds around longer. And, most importantly, it was down stream from where I usually hunted. Going there would mean an even longer haul home, paddling up the St. Croix River in the dark. After two evenings of watching them from a distance, however, I decided to make the trip.

I polled into the remote pocket and stopped to look around. The little corner was deceptively large, and the tree line that I had imagined being the end of it was, in reality, a false screen that hid several hundred yards of weedy pockets and bays. I was anxious to set up, and decided against exploring. Without realizing it, I went into my routine and started making decisions.

There wasn’t any wind, so I could set up anywhere.

The best cover was against the bluff, but I wanted to hunt with the sun at my back; I crossed the little bay.

The birds knew where they wanted to be, so I didn’t set out too many decoys; four or five would be right… but one with a jerk cord might be important.

I set them apart from each other, in pairs and made them look relaxed and comfortable; home for the night.

I hid the canoe across the way, and took a critical look at the decoys from the direction that the ducks would most likely see them.

I adjusted a few of them on the way back… and found good cover for a blind.

I checked the jerk cord, then the call.

I came up on an imaginary bird and swung with it as it flared in my mind’s eye, then bent over a few of the taller weeds that got in the way.

The first birds appeared as tiny specks. They were so high that, for an instant, I had trouble identifying them as ducks or getting a count. They were locked up from the moment I saw them and continued to fall out of the sky so quickly that in a blink, they were five mallards, four drakes and a hen.

I chuckled to myself crouching lower and checking the safety. They were on a wire to my decoys and I willed myself to watch just one of the drakes and not think of a second or third. I willed myself to stop thinking altogether. But, something was wrong. Their attention was diverted at the last instant, and they began to slide to the south as they fell. They were going into the other end of my secret spot, two hundred yards away!

“What the… BANG!” The first drake crumpled, his trajectory carrying it out of sight… WAP! I heard it hit the mud. The four remaining birds flared in three different directions, their speed transferred to lift as they rocketed skyward, towering without a wing beat.

The Kid. It had to be The Kid! No one else but the two of us would go to all of the trouble to get this far back into the marsh. A third drake, having reached the apex of his climb, seemed to hang there for an instant. “That rotten, little son-of-a… BANG!” It fell with the second drake, both reaching the water at the same time, their splashes blending into one. Shot rained down, peppering me, and the decoys.

The Kid and I have never met, but I know quite a bit about him. For instance, like me, he hunts out of a canoe… so he doesn’t have much money. I know that he doesn’t put in on the Minnesota side of the river…so he’s from Wisconsin. He must live near the river and be in high school, because I see him on the marsh every school holiday, and especially on snow days. I see him almost every time I’m out. So, like me, he lives to hunt ducks. Which means he doesn’t have a serious girlfriend or play on the football team. No woman or coach would put up with either one of us.

I looked at my watch, just barely four o’clock. The area high schools don’t let out until three… so it’s a sure bet that he cut classes, just as I skipped out of an illustration assignment to hunt today. Once, a cold snap drove all of the area ducks into a few local spring holes, and the kid beat me there… so, he’ll skip school as easily as I’ll skip work!

“It’s a cinch that he’s a good shot,” I said admiringly under my breath. The Kid waded out to retrieve his last two ducks. I didn’t see his face, but I knew he was smiling.

The Kid shot his limit of drakes that evening… out of just two groups of birds, and stuck around to watch me come up shy of mine. We both waited until long after dark before leaving, wanting to watch the roosting birds flight into our secret little corner by moonlight. When we left, he disappeared down stream, and I began my difficult and long journey up river to Marine on St. Croix, the Brookside Bar, and eventually to home.

I thought about The Kid on the paddle home. I knew a lot about him, but would I know him if we ever met? Why was he always alone? Who took him hunting the first time? Was his father at home? Did his father understand his son’s passion? Was he proud of him? Was he even still alive? How did The Kid do in school? How did he balance his schoolwork with all of his hunting? What was his name?

The questions I had about The Kid raised even more about myself; why do I prefer to hunt alone, even though I have a son? Do I understand my own passions… or my son’s? Does my boy know how proud I am of him? Just how important is the balance between schoolwork and youth’s enthusiasm anyway?

We saw a lot of each other over the next few years, and I looked forward to sharing the marsh with him. We always kept our distance, however, choosing a distant nod or a wave to a handshake and a greeting. Even without meeting, we somehow became partners, and in a sense, good friends.

Then, one season, he was gone. And, there were more questions; had he gone off to college? Moved away to take a job that didn’t let him hunt? Or, had he gone off to war, defending us from something that neither of us understood. Perhaps he’d found and married his first wife. If so, more than likely, I’d see him again after the divorce. I hope to catch up with him one day in the future, and I hope that he’ll recognize my calling, like I will his.