The Education of a Fish Guide 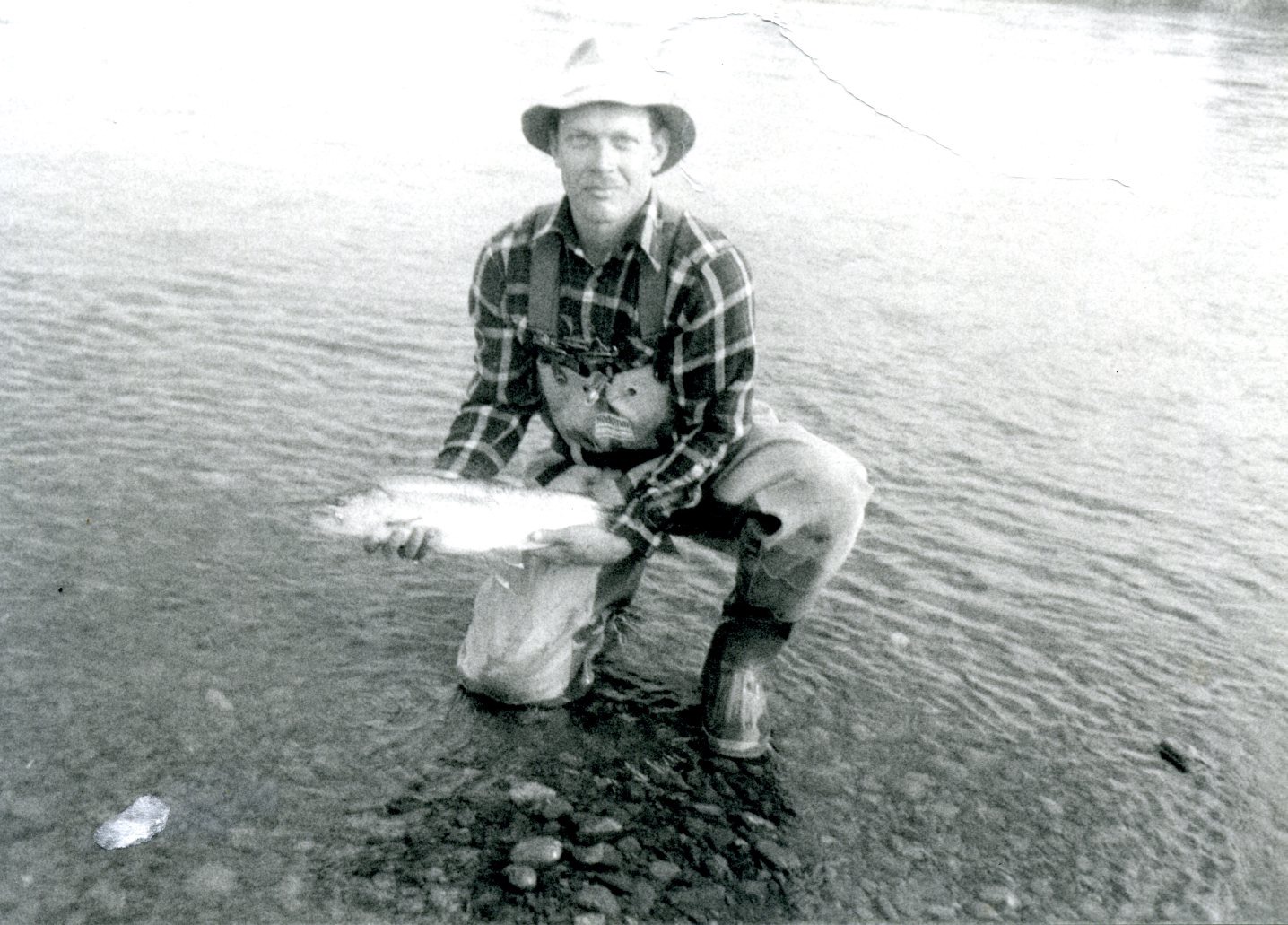 “I have never let my schooling interfere with my education.”
~ Mark Twain

It was my first season in Alaska, and within minutes of arriving at the lodge where I’d work for the summer, it became painfully obvious to me just how little I knew about being a guide. Judging by the look of amused bewilderment on the old guide’s face, it was also equally apparent to him.

“You mean you’ve never run an outboard before?” Rusty asked in utter disbelief.

“So, you probably don’t know how to fix one when it breaks,” he continued rhetorically.

“‘Never rowed a boat either, I suppose.”

“How the hell did you get this job?”

“No shit? Are you good at anything?”

“I learn quick.” It was all that I could think of to say.

So began my education as a fish guide. Once out of sight of the lodge, Rusty beached the boat.

“Now, the first thing you do when you get out of a boat is toss the anchor up on shore,” he instructed. “It sounds simple, right? Well you’d be surprised how many people forget and lose their boat.”

I took the ten-pound anchor and tossed it into the woods, and it just kept on going.

“Did I mention that it’s always a good idea to make sure that the rope is tied onto the boat?” He cackled. “It would’ve been a bad day if that happened in the lake.

Never leave home without a tool box.” Rusty continued, and he dumped his into the bottom of the boat. “Pay attention to what’s there while you wipe everything clean and repack it.”

I learned that a good guide is a prepared guide, and it seemed Rusty had at least one spare of everything.

“What’s the magnet for?” I asked, dangling it on the end of a long string. Rusty wasn’t amused with my digression from his lesson.

“Give me that shiny, new Swiss knife of yours,” he said, and tossed it into the lake, just a few tantalizing feet beyond my reach.

“You get the picture,” he said as a matter of fact.

The lesson lasted for several hours, and in that time, Rusty shared a decade’s worth of hard earned and useful knowledge. None of which had anything to do with catching fish.

“What about the fishing?” I asked.

“You wouldn’t be here if you couldn’t catch fish,” he responded. “You’ll figure out that part on your own… most days it’s the easiest thing about the job.”

One of the most important things I learned about Rusty; he wanted me to succeed. Like every good leader, he valued the success of his team over his own.

Rusty took personal responsibility for organizing the day. He always gave the least experienced guide the best boat with the most dependable motor. He made sure that the newest guide fished the most productive water with the best fishermen. He was part coach, drill instructor, father confessor, big brother, mentor, and one hell of a good guy to spend time with. Rusty taught several generations of Alaskan fishing guides everything they needed to know about safety, catching fish, improvising their way out of a sticky situation, and having fun.

It was midway through that first season before I was considered competent enough to be assigned to a river camp with Rusty and his side-kick, Tom. While we all knew that The Boss was in charge, we had also learned that he usually deferred to Rusty’s musings about out-camp assignments. The night that The Boss told me to pack my bags was the night I knew that Rusty had determined I wasn’t too much of a pain in the ass to have in camp.

It was an hour flight to the coast and the over-night camp where I was to work. I had never seen the Kulukak River though I’d heard plenty about it from the guests who’d fished at Rusty and Tom’s overnight camp.

From the air, it seemed a wild and desolate place. “There’s where the village used to be,” Jack the pilot yelled over the roar of the radial engine. “Just up the hill from the wrecked barge… in low light, you can see the outlines of the barabaras.”

“What’s that?” I asked, pointing out a small structure near the mouth of the river.

“Sauna.” Jack answered. “Some commercial fishermen made it a few years ago. Here come the guys.” He nodded towards two boats snaking their way down river. “You ready?” He asked, pumping in some flaps.

“Where are we landing?” I yelled.

“In the river,” he said in a normal voice, for it was suddenly much quieter as the prop feathered.

Jack adjusted the trim and lined the Beaver up with the longest, widest stretch of river, dropped over the grass bank and settled smoothly on the water. He quickly pumped out the flaps and dropped the water rudders.

Once on the water, we powered around the corner where Rusty and Tom tailed the plane and eased it onto the sand. “Well, Mr. White,” Rusty said with a grin. “What a wonderful surprise. Did you bring any goodies?”

“Let’s see,” I said taking a mental inventory. “There’s twenty gallons of gas, a jug of two-cycle, Marine-Tex, clean clothes, a case of Spam, some Moline and Pro-Cure, a rack of beer… and a surprise from the girls in the kitchen.” I said this while handing Tom a plastic mayonnaise jar full of chocolate chip cookies. “And, there’s mail.” I added.

“Very nice,” Rusty said. “Anything else?”

“There’s a present in the back of the plane from the guys you guided last week.” Jack added with a wink and a smile.

“Well, that’s very nice,” Rusty said, nodding to Tom while gently passing him a cardboard box. It was handled with extreme care and set lovingly on the float.

After the plane was unloaded, we held Jack out in the current while he started the Beaver. Once warmed up, he turned downriver, and a few minutes later we watched as he roared off and banked north towards the lodge.

“Why don’t we run this stuff to camp,” Rusty announced as the drone of the plane faded. “And, we’ll show you a little of our river.”

When we arrived at camp I unpacked my gear while Rusty and Tom affectionately carried their box into our sleeping tent. Inside, there was a liter bottle each of Jack Daniel’s, Jose Cuervo, Canadian Mist, and Johnny Walker. After handshakes were exchanged, they slid the box under Rusty’s cot, next to a similar box, which held the same bottles, except these held only a few fingers of liquor.

We spent the rest of the day preparing for the arrival of four fishermen who would fish and spend the night. The boats were cleaned and made orderly; gas tanks topped off, and a bit of two-cycle dropped into the oarlocks to keep them from squeaking. The tackle was gone over meticulously; reels cleaned and oiled, line replaced, lures and flies organized and their hooks sharpened. When all was in order, we went scouting for salmon. The next day’s schedule was determined by what was found, and what the tide might bring.

Once back at camp, I surveyed the kitchen tent, anticipated what stores would arrive with the guests, and planned dinner and the following day’s breakfast. When all was right, a few beers were thrown back, and after dinner the fresh bottle of Jack Daniel’s was cracked open. I wondered why we didn’t finish the opened bottle first, but didn’t ask. 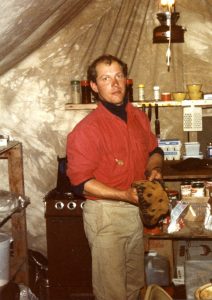 The next morning, I accompanied Rusty and his fishermen, helping where I could, and learning more about the river. After lunch I was dropped off at camp to ready the guest tent and prepare dinner. At a prearranged time Rusty and Tom returned with four of the happiest fishermen I’d ever seen.

Everyone gathered around the fire to rest, relive the day’s adventures, and share a drink or two before dinner. The fishermen had grossly underestimated their appetite for whiskey, and it wasn’t long before their supply was gone.

“Say, guys…you, ah, wouldn’t have any extra whiskey around would you?” One of the fishermen asked bashfully.

“Why sure,” Rusty and Tom chimed in unison. “We’ve got a bit between us, and it’s all yours… no problem at all.”

“Are you sure? I mean you’re out here in the middle of nowhere, and we’ll be back at the lodge tomorrow night.”

“No problem,” Rusty said, “As a matter of fact, you’d be doing me a big favor if you drank it all. The ‘Mad Russian’,” he said, nodding at Tom, “snores something horrible when he’s into his cups.”

“Please, drink it all,” Tom added. “I don’t like the way Rusty eyes me when we’re alone. I’d feel better if every drop of alcohol in camp was gone! I’ll go and get it for you.”

“Well, this is awful nice of you guys,” the spokesman chuckled. “We really appreciate it.”

Tom returned with the mostly spent bottle of Jack, poured out exactly four drinks, and emptied it.

Half an hour later the stories were rolling and the laughter brisk. Tom asked Rusty, “Don’t we have a little Scotch and a bit of Canadian Whiskey? I hate to see these fellas with empty cups.”

After dinner, things had quieted down a bit, and everyone was staring into the fire, when Rusty looked at me with a twinkle in his eyes, and asked, “Bob, you brought a little something didn’t you? Why don’t you go and get it for the guys.”

The stories and laughter were eventually replaced by yawns and Rusty officially ended the day. “We’d better turn in, fellas. We’ll be up early and fishin’ hard till Capt’n Jack picks you up.”

‘Good nights’ were said, and once in our tent, Rusty silently broke the seal on a fresh bottle. He lined up three tin cups on his bunk, and poured a liberal amount of whiskey into each. He winked and quietly whispered, “Cheers.”

I flew out with the fishermen the next day, and upon our arrival at the lodge, the leader of the group pulled me aside and asked to have four bottles sent out to camp to replace the ones that he and his friends had been so generously invited to finish.

“Of course.” I said. “I’ll deliver it personally next time I go out. Rusty and Tom will really appreciate it.”

I was no longer confused, and my education as a fish guide was advanced.

“So… ya wanta be a fish guide, eh?” Rusty cackled maniacally as he threw one of my duffels to his shoulder. “What are ya… stupid?  Ya don’t look that stupid!”

These were the first words Rusty ever said to me, and over the next three decades, I would ask myself this same question…  at least once every day.