By Lisa WhiteDecember 4, 2020Adventures
No Comments 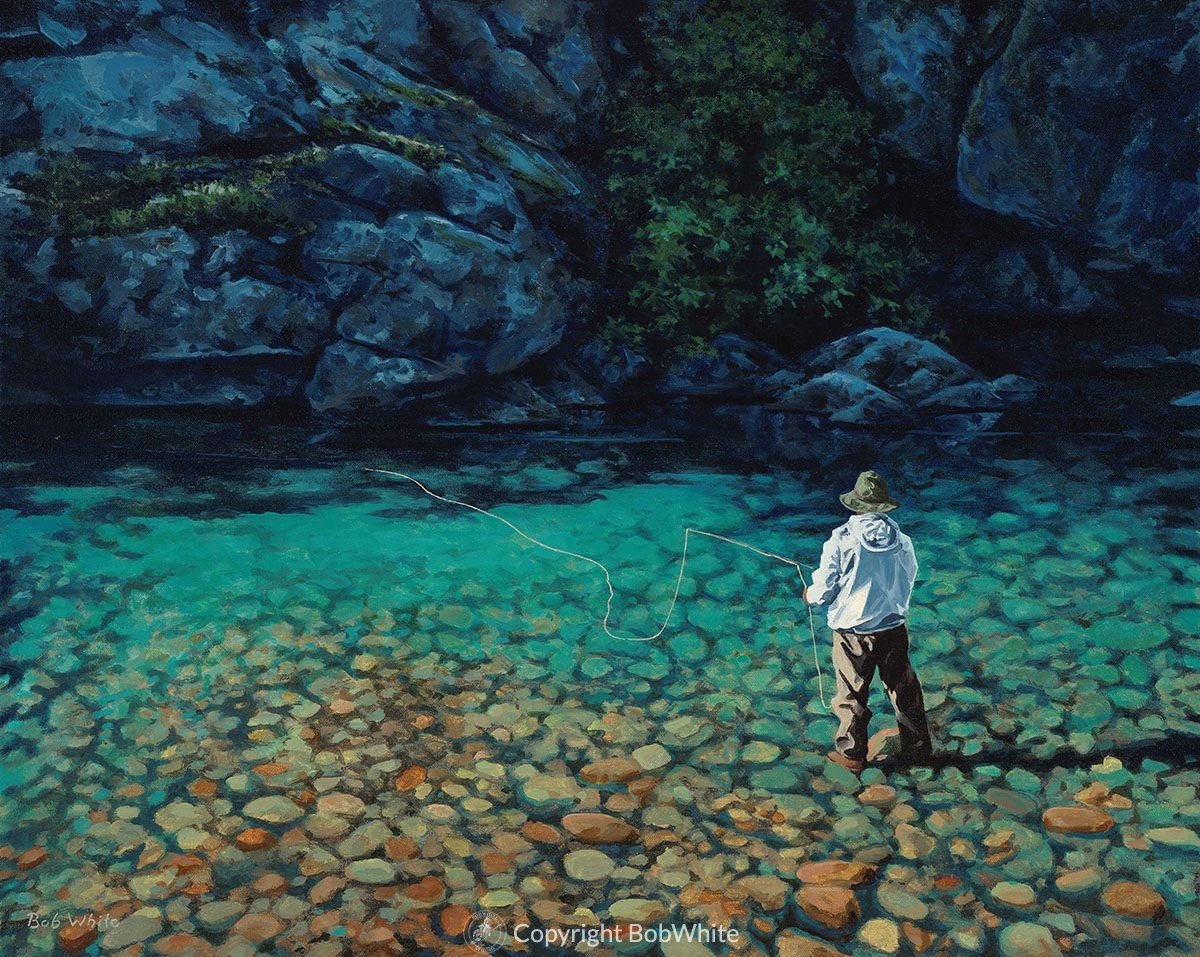 It is always the best policy to speak the truth – unless, of course, you are an exceptionally good liar.  ~ Jerome K. Jerome

A fishing guide’s day always begins the night before. The process of deciding which fishermen will be paired together, and who will guide them on what stretch of water, is often made at the bar or during dinner. The process often becomes political, and is frequently Byzantine.

Despite the myriad of mental gymnastics and the logistical decisions being made all around me, I was enjoying a relaxing dinner. As luck would have it, my friend Bob, the host of the group we were guiding, had made his decision. We would fish together the next day; just the two of us.

We were excited about fishing our favorite section of the Malleo River the next day. There was no access to the section of river we called “The Canyon”, and the only way to fish it was to carry a lunch, and spend the day wading it from one end to the other. When we finished, there’d be a truck parked in a shady copse of trees with a key on top of the front left tire, and a number of cold beers in a cooler on the seat.

Every day of fishing is different; it can be easy, difficult, or challenging. Too many effortless fish numbs both the fisherman and his guide. Fishing guides call these days “no-brainers”, meaning that anyone with a pulse can catch fish. On the other hand, not seeing any fish to work leaves the guide and fisherman feeling impotent. At its worst, this causes a hopeless resignation. The very best days are those when a few hard-earned fish makes each of them feel good about their abilities.

It’s not surprising that when guiding a good fisherman who’s confident in his craft, the number of fish landed has little to do with the way the day’s remembered. Spotting fish that are challenging, losing a bunch and beating a few, but always working at it, creates a special bond of teamwork and friendship between the two. Let me put it this way; I’ve spent a lot of days in Alaska unhooking countless chum or silver salmon with fishermen whose names I don’t recall.

That next day in the canyon was difficult. Early on, while the light was flat, we prospected with large dry flies at the base of a cliff, where the river tumbles over a natural freestone dam and runs into a towering basalt wall eighty feet high. The fish that had come easily to Bob’s flies the year before were nowhere to be seen. Working upstream throughout the morning yielded little, and the subsequent runs and pools seemed void of fish. As much as we both enjoy a challenge, our enthusiasm was starting to flag. My friend Bob is not a quitter, however, and I knew I could count on him to keep working. As a guide, I simply didn’t have the luxury of writing a day off. I had to believe that we’d figure it out, and that the Fish God would eventually smile upon us. Still, I couldn’t help asking myself if it was going to be “one of those days”.

Our spirits picked up as the sun climbed high into the cloudless sky, and the game changed from blind prospecting to hunting and fooling individual fish. This is what we’re both best at, and we spread out, looking hard into the cool shadows, and leapfrogging our way upstream like a couple of bird dogs. Occasionally, I’d climb a tree to get a better view into a pool. Nothing.

Without thinking about it, I heard myself announce, “Late last season, I took a monster brown trout, a big male, in this next pool, and I’ve seen him several times since.”

The fact of the matter is that I had once caught a big brown in that pool, but not for several years. Dominant trout are territorial and I’d looked hard for the monster since our first meeting. I hadn’t seen him since the day I watched him slip from my hands more than two years before. I don’t know why I’d said what I did. I hadn’t planned to lie to my friend. Perhaps, I wanted to give his spirit a boost… or I needed something to believe in, and was lying to myself. It was one hell of a long shot, but the only one I had. The bottom line was this; once the words came out of my mouth, there was no turning back.

“Where does he lie?” Bob asked, as we sat in the shade watching the pool. “Across the river, in the shadow of the cliff, under the lone Arucaria tree?” My good friend wanted to believe in the fish. He could see where the big brown should be in his mind’s eye.

It couldn’t be that simple. A fish this wary would be subtle. “That’s right,” I said, promoting my desperate deception. “But, a little further downstream, in the slot between those two big rocks.”

There’s nothing more contagious than the belief in a big fish. Even I now believed that our big brown was holding there, just out of sight, waiting to take Bob’s fly. We were both excited, and I needed to slow things down. “Let’s take a few more minutes to watch the water,” I suggested. “He may show himself, and it would be nice to see how he moves to a fly. Besides, I need to retie that knot, and it wouldn’t hurt to sharpen your hook. Why don’t you watch the pool, while I square us away.”

“Have you seen him?” I asked quietly over Bob’s shoulder as I passed him his rod. “Here’s the fly. ‘Careful I’ve sharpened the hook.”

“Maybe, there in the shadows, just on the other side of that downstream rock, in front of the long orange stone?”

Bob and I have spent a lot of time on the water together. There was no need for me to coach him into position, warn him to move slowly, suggest that he stay down, or remind him not to false cast over the fish, nor anything else, for that matter.  Bob didn’t need a coach. Perhaps, he’d benefit from a guide without such an active imagination, but certainly not from a back-seat-driver. The most productive thing that I could do for him was to was stay out of his way and watch quietly.

The cast was perfect; the correct distance, curling slightly to the left, with the line, leader and fly all gently settling onto the water at the same time. Bob had correctly judged the complex currents, and a necessary but subtle mend at just the right time assured a perfect drift over the shadow that he believed (and I hoped) would be our fish. The dry fly, a big H&L Variant glided silently down the run. It was all happening in slow motion, and everything was perfect. I could almost see the big fish tipping up and drifting back. I was silently willing it to be so. And then, the fly was past the shadow. Nothing.

Some intuitive sense caused us to follow the fly, even though it was long past the dark spot where we believed the big fish to lie. We watched in fascination as the large orange “stone” that Bob had used as a point of reference began to drift downstream with the fly, pacing it, now closing with it. There wasn’t much drift left, and any second the inevitable drag would catch up to the fly. With it, our deception would be over. At the last possible second, big white mouth opened, hesitated, and the fly disappeared.

The fight was predictable, as with most big browns. It ran downstream and deeply toward it’s sheltering lie. Bob swept his rod low and right, using the fish’s momentum to clear the obstacle. It sulked while we cheered, made several more attempts at reaching safety, each one less forceful than the last, and eventually we rolled her gently into the shallows.

“Want a picture of you and your fish?” I asked, camera in hand.

“Just the fish. Would you look at those colors?”

After we revived her, admired her, and watched her swim away, we sat back in the cool shade under the willows and stared at the water. Birds called from the trees overhead, afternoon insects hummed, quail called from the hills around us, and the throaty voice of the rapids upstream drifted in and out of our hearing with subtle shifts of the wind. “Nice job,” my friend said, offering me his hand. “You knew he was there all along, didn’t you? That was incredible! Thanks.”

What could I say? Did I know that the fish was there? Possibly. Maybe. What’s intuition? Who’ll ever know? What makes a fisherman great, or a guide lucky?

“Thank you.” It was all that I could think of to say.