By Lisa WhiteMay 13, 2022Adventures
No Comments 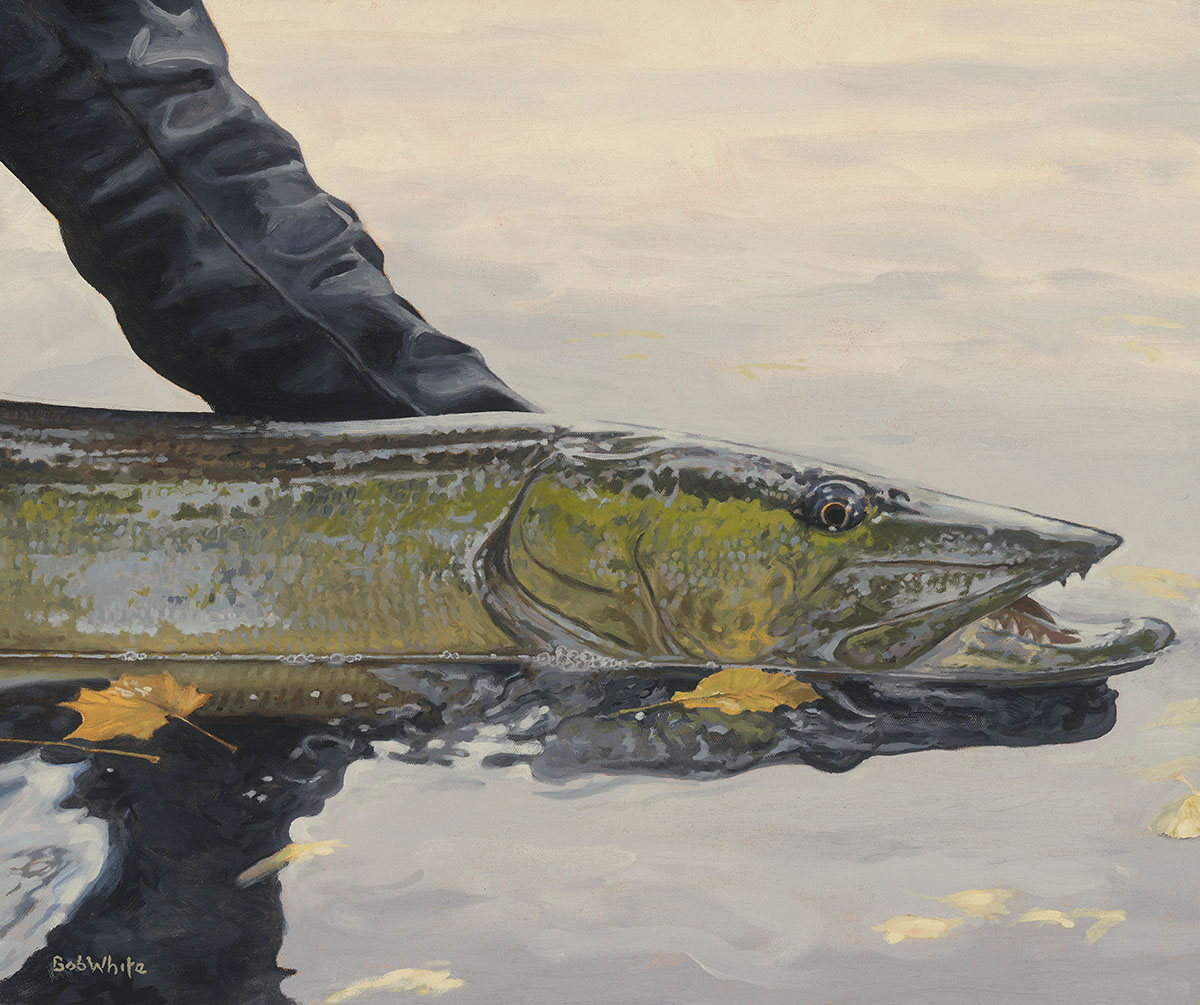 The painting, “One Last Look – Musky”, was created as a tribute to my friend John Gierach and his first big musky; a fish that took a lot of time, concentration, and effort to catch. John had joined our annual Northwoods event, Musky Madness, for two years before catching his bell-ringer; a beautiful fish of nearly fifty-inches. I’d been waiting for him to catch this fish, and I knew the instant it was in the net that I’d paint it.

I believe it’s important for an artist to paint from personal experience. In my case, because those experiences often occur while I’m guiding – when I don’t have the time or ability to capture them on paper or canvas – I use my camera as a sketch book. As John’s big fish was being revived and admired, I took a number of photos; reference material for the painting I’d complete later in the studio.

We all live with art in our lives, but few have the opportunity to witness its creation, and to many the process remains mysterious and cryptic, almost religious. I’m often asked about my process and when I describe my use of photography and the projection of images onto paper and canvas, some seem let down – perhaps disappointed by my lack of magical powers.

I love to paint plein air (painting in the field while observing the subject), but I think of it as something I’ll happily do more of once I’m retired and unencumbered by editorial deadlines. While enjoyable, painting in the field has many inherent limitations – generally one can only work in daylight, the light and weather constantly change, subjects move, and if you live in a northern climate (Minnesota, for instance) there are four or five winter months when painting outside can be extremely challenging, even impossible.

As it is, I gather my reference material while in the field (or on the water), and catalog the images on my computer. When I decide to paint one of those images I project and draw it, transferring the image to my canvas or paper before painting it. I look at my camera, computer, and projector as simply tools of my trade. And indeed, my tools may be described as modern variations of much older ones; the camera obscura, a term first used in 1604 with written observations as far back 500 BCE, and more recently, the camera lucida, an instrument first produced for artists in 1806, years before chemical photography. With this device, essentially a prism on a stick, whatever the artist looks at through the prism appears on the paper in front of them to trace.

While the use of these tools saves time (and after all, I’m in the business of making images) I am not a slave to the photograph, attempting to replicate its every detail. Each painting I create presents a particularly personal challenge; telling a story by capturing the essence of the image while simplifying it, and thereby avoiding the tyranny of detail. Believe it or not, it’d be much easier for me to paint every little detail. Doing so is free of risk, but not much fun. My goal is to create the illusion of detail with a balance of shape, color, value, and painterly brushwork.

The day John caught his big fish began like all the others. John was up early and joined us for coffee while Lisa worked on breakfast for twenty-five, and I kept the coffee pots going. Lisa was concerned that John was up before all the rest because his bedroom was over the kitchen in the old Northwoods lodge we rent for the event, but I knew better. John’s an early riser, and a pleasant one.

“Today’s the day,” we toasted with steaming mugs of coffee. There was no hint of frustration about all of the fishless hours spent lobbing twelve-inch flies, and I thought to myself, if ever a guy deserved a good fish, this is him.

John is one of the most genuine people I know. He is, in life, exactly how he writes; there is absolutely no pretense. He’s honest, humble, with a wry, quick wit, and painfully insightful. He’d caught a musky or two in years past, but never anything his guide would ask to hold and be photographed with; the acid test of any good fish.

John was to spend the day with our son, Jake, and a very fishy young guide named Luke. My friend and I would shadow them down the river, far enough behind to rest the water, but not so far that we couldn’t catch up if a good fish was tagged.

John was typically upbeat about the day as we launched, and Jake was nervous. This was his first time out for musky… and in a boat with John Gierach. Jake’s predicament wasn’t lost on either of us and we smiled at one another in acknowledgment. Jake asked, “What should I remember?”

John took the ever-present notebook out of his shirt pocket and jotted down my advice, which I took as a compliment.

Later that morning, just before lunch, I watched Luke’s boat slide past a rocky point and hoover off the eddy it created. Jake was in the front of the boat and hit the spot perfectly, remembering to figure-eight at the end of his retrieve. After polite hesitation, John’s fly slapped down just a few inches from where Jake’s had, creating a second hole in the foam. John walked the fly back to the boat, and the first sweep of his figure-eight yielded nothing, but the second met resistance and he strip-set like a man who’d never caught a trout in his life.

Luke contained the fight to a limited area and the fish was landed within minutes… a sure sign of expert guiding, and an angler who listens to good advice.

I’ve rarely seen John beam so broadly, but I noticed that there was both joy and humility in his smile. He recognized that Jake had made the same cast just minutes before, but for some reason the fish had chosen to strike the second fly … his fly.

John smiled and reached for his note book while Luke posed for a photograph with his fish.