By Lisa WhiteNovember 17, 2022Adventures
No Comments 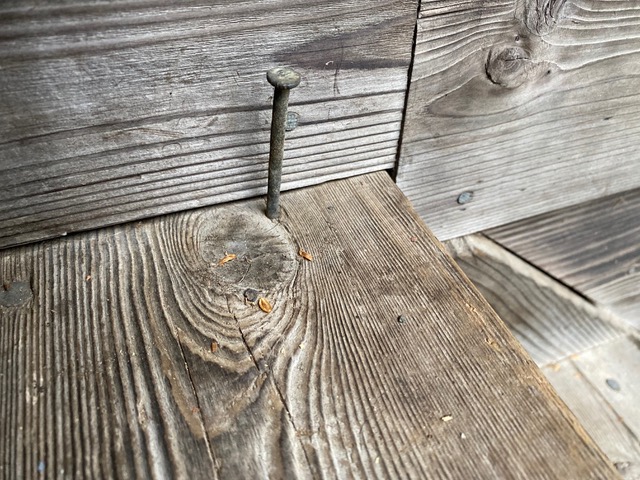 In a recent email, an old friend who had joined me last spring at Alaska Trophy Adventures Lodge said, “I had a great time there even if I was the long nail in the board.”

I’d never heard the saying used before, but I knew exactly what it meant. In his book, “A Reverence for Wood”, the artist and author Eric Sloane wrote about the deconstruction of an old barn, and the new owner’s puzzlement about many features revealed in the process. For instance, all the nails holding down the wood shingles were exposed to the sky for an inch or more. Why had the past owner not set them better, or reset those that worked loose, he wondered?

To find out why, and the meaning of that old saying you might enjoy this review by Douglas Douma.

On a more personal note, when the studio was built in the summer of 1993, one of the carpenters chose to anchor a stair tread by nailing next to a knot, which has a different density than the surrounding wood. With each change in humidity and every changes of the seasons, these differences have caused the nail to slowly work its way up from the tread.

In homage to Eric Sloane, I’ve left the nail to its course… wondering if I’ll be around to see it finally work its way loose and if perhaps, when it does… it will be the harbinger of my passing.

With this in mind, I’ve asked Lisa to mark my final resting spot with a single large field stone, upon which the word, “Finally” has been engraved.